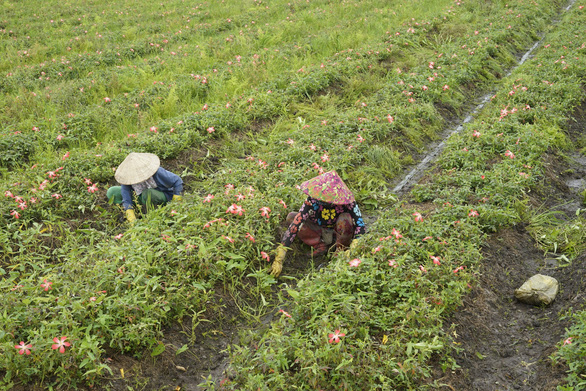 A two-man team embarked on separate paths, each full of challenges, but decided to leave behind their stable city jobs to launch a farming startup to make full use of deserted land in the Mekong Delta province of Kien Giang.

As many young people leave the paddies in their hometown for office or factory work in big cities, 38-year-old Bui Vu Linh (elder Linh) and 27-year-old Nguyen Vu Linh (younger Linh), who hails from Kien Giang Province, decided to reverse the trend.

The pair have devoted their youth, passion and knowledge to forging their own path so they can live with no regrets.

After four years and bitter failures, all their hard work paid off as their initiative, An Moc Farm, nestled in younger Linh’s hometown, began to yield sweet fruits.

Elder Linh, who goes by the nickname ‘Wanderlust Yogi’, also runs a cozy coffee shop in his hometown Ca Mau City, the capital of the namesake southernmost province.

The man had carved out success for himself during his years in Ho Chi Minh City, where he was in charge of scouting for actors and actresses and settings for local and Thai film companies, and was even promoted to art director when he was only 24.

He was even honored as one of the city’s exemplary youths.

Despite the decent incomes, he realized he did not really fit in and his heart lies elsewhere, elder Linh shared.

Tired of the showbiz buzz and wasteful, extravagant lifestyle it entails, which took its toll on his own health, he decided to make it home.

His turning point came in 2018 when he came across and befriended younger Linh on a social network.

Nguyen Vu Linh, or younger Linh, decided to turn his childhood passion in farming into a career by helping his mother run a shop in Ho Chi Minh City after graduating from middle school to save up for a future farm in his hometown.

He shared he has a former employer to thank for the part she has played in his career.

Around 2011, the owner of a food workshop where he was working advised him to get back to school and finish what he had left off.

Thanks to the kind woman’s support, the young man was able to work his way through high school and later gained entry into two colleges at the same time.

However, he never accepted any, including Information Technology, out of fear he’d be trapped in a career he would not like.

Younger Linh decided to do his two-year military service before helping around at farms in Long An and Tra Vinh Provinces, also in the Mekong Delta, in the next three years.

During that time, the enterprising man completed distance education courses in Business Administration and Microbiology offered by a college in the Netherlands and put the knowledge he learned into practice at the farms he was working at.

He later left the farms and the stable incomes and founded his own startup, An Moc Farm, by building everything from the ground up and resurrecting barren fields as most young people in his hometown joined the rural-to-urban migration.

Linh started out with a 3,000-square-meter facility before expanding it to 17 hectares and building a 350-square-meter raw material production workshop with a drying system and a warehouse.

After procuring a stable source of materials and securing several large businesses across the country as customers and partners for export, he began to rake in the cash in 2017 and 2018.

That was when the elder Linh jumped on board, impressed by how his younger friend had taken a shot at achieving his dreams in clean agriculture.

“We first met in person in Kien Giang. I was stunned seeing the marooned villages and huge land parcels unattended,” elder Linh recalled, adding he was also concerned by local farming households’ abuse of pesticides.

What he had his heart set on was helping his like-minded friend spread the seeds of clean agriculture among the local farming community and adding value to homegrown produce.

“I find it quite ‘face-losing’ that made-in-Vietnam produce are generally beaten by Thai counterparts. It hurts my national pride,” Linh noted, explaining why he stepped right in to lend a hand.

Elder Linh now serves as the sales and marketing director at An Moc Farm, tapping into the expertise he gained from his previous jobs with the entertainment firms.

The man has also set up a club called ‘Doi Books’ (Books of Life), a project involved in aiding street children, collecting used books and clothing items and raising funds for community activities.

Things were not always so easy.

The duo faced tough times after a typhoon which swirled across Kien Giang in August 2019 devastated younger Linh’s hometown and swept away nearly 10 hectares of plants on his farm and much of their hope.

“The typhoon coincided with the typical floating season of the Mekong Delta. We were left almost empty-handed as the prolonged downpours wreaked serious havoc on the plants,” younger Linh sadly recalled.

As the duo struggled to pick up the pieces and worked to revive the destroyed fields, which then shrank to only 10 hectares, they suffered another setback: resurgences of the novel coronavirus (COVID-19) pandemic.

After securing contracts to export herbal materials to India and South Korea in 2018 and 2019, the pair saw all their preparations in money, staff, and time down the drain as India was grappling with a massive wave of COVID cases in the country.

With no outlets found for sam bo chinh, a kind of ginseng plant cultivated in many localities across Vietnam, ordered by India to produce anti-cancer dietary supplements, the two Linhs found themselves switching to other markets including South Korea, Thailand and local businesses while the remainder ended up as warehouse putaways.

Investors refused to renew their funding and even long-time shareholders withdrew from the project.

“Losses, debts and broken relationships are what most startup owners have to go through,” the two Linhs shared.

With the financial support from Thu, director of a local paint company, they pressed on and charged ahead to overcome their most trying time.

The pair has also received a funding package for spearhead agriculture firms from the provincial authorities to expand the scope of their business.

They are looking to join hands with U Minh Thuong raw material zone to step up production.

The entrepreneurs shared the key to their survival through the third and fourth relapses of the COVID-19 pandemic, the most severe so far, is that their products, including food and drinks, boast long shelf and warehouse life.

Latest additions to their wide range of products intended for retail markets are herbal coffee and cocoa, healthy herbal tea, as well as teas, noodles and flour from butterfly pea.