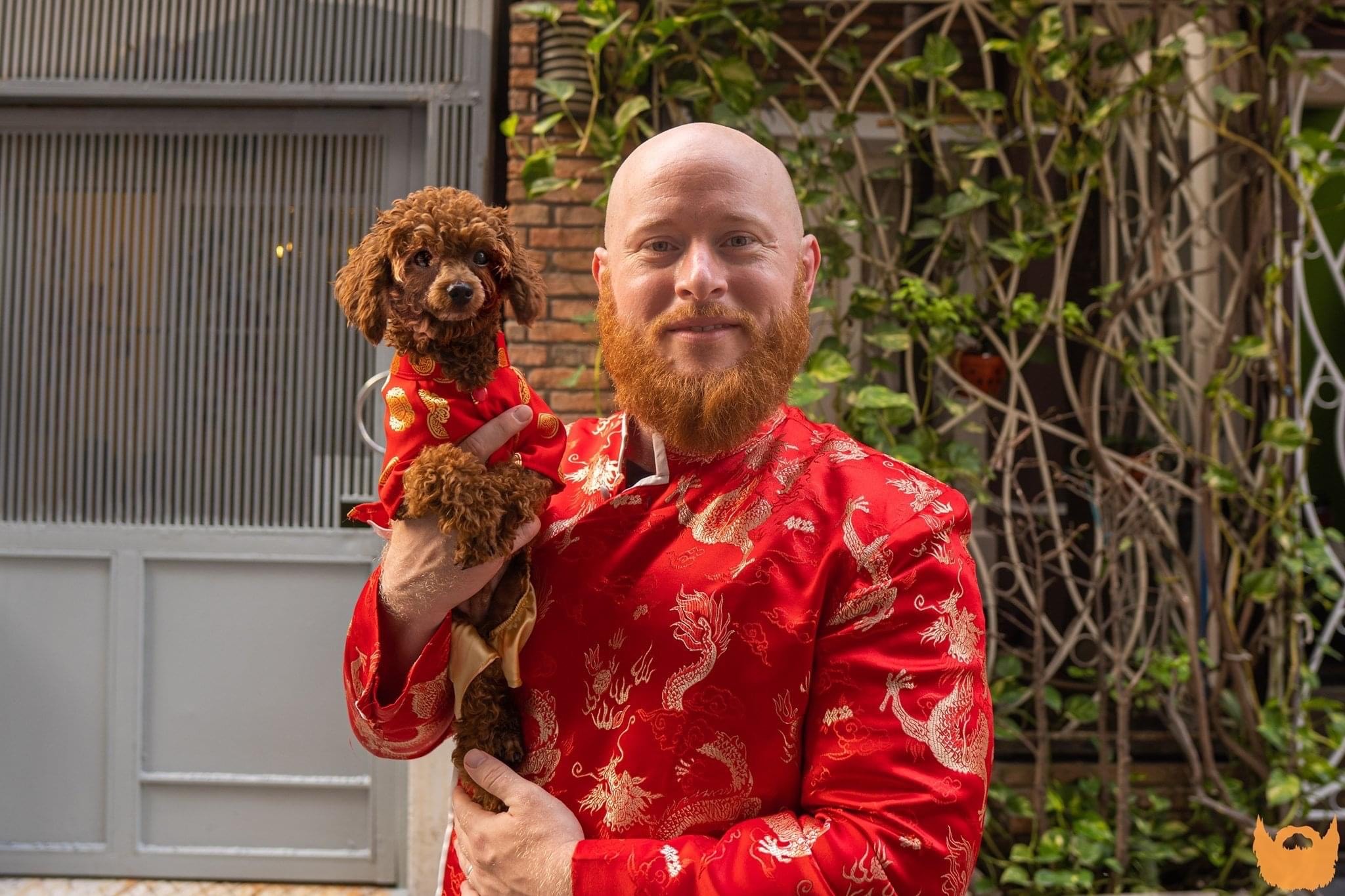 Brandon Hurley’s trademark orange beard is a familiar sight to Vietnam’s netizens thanks to his wildly popular YouTube and TikTok videos in which he showcases various aspects of Vietnamese culture using fluent Vietnamese.

In just a few short years, Hurley, who goes by Phuc Map (‘Map’ is the Vietnamese word for ‘Fat” while ‘Phuc’ is a common Vietnamese name), has accrued more than 429,000 subscribers on his YouTube channel Phúc Mập Vlog and 455,600 followers on his TikTok @phucmapvlog.

An American who speaks Vietnamese

In early 2019, Hurley began drawing the attention of local netizens after a video went viral of him wearing Vietnamese women’s pajamas on the streets of Ho Chi Minh City with his pet chicken.

“The story [of that first viral video] was about a foreigner who wanted to dress in the traditional outfits of Vietnam, but accidentally bought traditional pajamas worn by women,” Hurley explained.

“This foreigner also heard that dogs are commonly stolen in Vietnam, so he thought a chicken would be a better pet.

“Honestly, the videos would not have been any good if I did not speak Vietnamese.

My ability to speak conversational Vietnamese made the videos what they were.

"After one million views, the video still has a 98.8 percent like-to-dislike ratio, so it’s safe to say people enjoyed it.”

Like other vloggers', Hurley’s content covers a wide range of topics, from cultural quirks, to local food, travel, and life in Vietnam.

Some of Hurley’s most-viewed videos include 'Which region of Vietnam has the best food?,' 'Tet (Vietnamese Lunar New Year) explained by a foreigner in Vietnam,' and 'The most delicious banh canh cua (crab noodles) in Vietnam.'

Foreigners and locals alike tend to be stunned by the fluent Vietnamese Hurley puts on display in such videos.

In a video shot before Ho Chi Minh City implemented social distancing to prevent the spread of COVID-19 which was posted on his YouTube channel in early June, Hurley led his audience on a tour of his neighborhood in Tan Binh District.

With a cap, sunglasses, and a face mask, the American man ventured through local streets, coconut smoothie in hand, striking up conversations with locals.

According to Hurley, the inspiration behind his videos is that he “always tries to be someone that makes other people laugh.”

“I wouldn't call myself a comedian, but I would say I am capable of putting a smile on the faces of others,” he shared.

“To be honest, I started my YouTube channel in Vietnam to test my Vietnamese in a humorous way. Some of the videos became mainstream and most of the audience enjoyed my work.”

Hurley believed that his audience consists of people who are interested in Vietnam, Vietnamese culture, and the Vietnamese language.

'Vietnam has changed my life forever'

Before making the decision to settle down in the country, Hurley had spent time in Thailand, Malaysia, and Cambodia.

Coming to Asia was his first experience outside of his home country.

“I am very pleased with my choice to live in Vietnam,” Hurley said.

“Every country has its problems, but overall, I am thoroughly impressed with the different aspects of Vietnam, from the food and the people to the daily life.

After being in Vietnam for roughly four years, Hurley married a Vietnamese woman and got a tattoo of Vietnam’s map.

“I decided to get my Vietnam tattoo after four years in the country," he said.

"Even before I started my YouTube channel, I felt like Vietnam had changed my life forever, and it was one way for me to always remember my second home.”

In emphasizing why he has chosen Vietnam as his home, Hurley insisted on his admiration for “the people and the community.”

“There is a visible difference in the community of Vietnam compared to my country," he remarked.

"In general, Vietnamese see themselves as one unit, one group, one family, whereas in America, they have lost their sense of unity and everyone finds reasons to take sides on different issues.

“The definition of Vietnam in my heart is a community of people that work together to achieve the same goal, a country whose bond in their society can be a great example for other countries throughout the world.

“I admire what Vietnam has, and even though I will always be a foreigner here, I feel very welcomed at the same time."