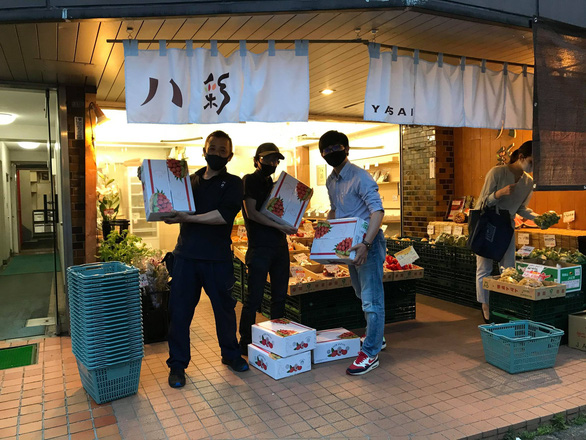 After spending more than four years building up a company that promotes tourism and trade in Japan, Nguyen Phi Thoan thought it was time for him to harvest the first crop of fruits, but then the COVID-19 pandemic turned everything upside down.

His company, JV Solutions Co., based in Kawasaki Prefecture, got several calls to cancel tours.

Thoan found himself extremely stressed every morning waking up to the question of where to get around VND200 million (US$8,787) to pay office rent and salaries for seven full-time employees at that time.

All the savings he had accumulated for more than ten years of working as an employee for three Japanese companies before launching his own company had already been used up quickly to support JV Solutions Co. during the pandemic.

Tourism was one of the most affected industries during the COVID-19 pandemic around the world, so his limited savings could only keep the firm running for ten months.

On top of stress, anxiety, and concerns, Thoan also got a recurrence of a disc herniation, a condition he had been treated for in Singapore 13 years earlier.

He was forced to stay at home without moving for more than six months.

"The pandemic made me reflect on everything, and think twice about what I have been doing for the last years.

“Being forced to stay home alone for such a long time because of the condition allowed me to mull over what I should do next.”

Thoan added that right now, JV Solutions Co. trades fresh fruits and vegetables from Vietnam and other countries as another way to survive while waiting for the tourism industry to bounce back from the COVID-19 pandemic.

Thoan was born in the Mekong Delta province of Long An.

He has loved traveling since he was a teenager.

Few people know that the entrepreneur was once the administrator of the site Phuot.vn, a blog meant for travelers who want to explore many destinations in their own way instead of booking through a travel agency.

Despite being trained as a chemical engineer, Thoan has a special passion for tourism.

That is why he decided to launch JV Solutions, a company offering private tours in Japan, when he left a job with a salary of US$4,000 a month at 505 Company in March 2017.

In Thoan’s observation, the demand for travel to Japan for studying and doing business has increased remarkably during the last few years.

JV Solutions chooses to offer private tours to groups of seven to 14 people who want to pay visits to Japan for various purposes such as tourism, studying, doing business, and trade promotions.

The company also takes part in holding festivals promoting trade between Japanese and Vietnamese in the city of Kawasaki.

They served an average of hundreds of customers monthly, which ensured them a source of stable revenue.

When the pandemic hit Japan, it put an end to the ambitious plan in which Thoan collaborated with a Thai partner to set up tours for Thai tourists coming to Japan.

On top of the unexpected effects of the pandemic, he suffered a severe disc herniation relapse.

The man who used to work up to 17 to 18 hours a day felt he did not have enough strength then.

“I already know how to value my health now,” Thoan laughed while recalling the most difficult days he experienced more than one year ago.

Reflecting on his strength

Six months of treatment provided Thoan with a unique chance to mull over what he should have done differently, especially in which directions he can move to take his JV Solutions out of the COVID-19 pandemic.

Given the health crisis will not be likely to phase out in the near future, he cannot return to the tourism industry as quickly as he wants.

His hope was further dampened after the plan to make a pilot vaccine tour with the first 60 tourists between Vietnam and Japan was canceled indefinitely because of the complicated developments of the pandemic in Vietnam.

He thought of what he had been trained in a university in Vietnam as an engineer of food chemistry and post-harvest technology.

He thought of what he did as an employee for three Japanese companies before.

He thought of his hometown, Long An, where there is a famous kind of banana called Fohla and various kinds of tropical fruit.

Thoan decided to embark on importing fruits from Vietnam into Japan.

Despite his weak physical health then, in October 2020, Thoan pulled a cart to introduce samples of banana to some potential partners in Tokyo.

“In fact, I don’t remember why I could do things like that back then,” recalled Thoan.

“The disc herniation hurt me badly.

"But it was likely that some business associates sympathized with me when they looked at my condition then, I guessed, so I got some first orders."

Apart from bananas, Thoan imported more fruits such as dragon fruits, durians, and rambutans, not only from Vietnam but also from other countries like Guatemala.

He acknowledges he is a newbie in the business he has just started during the pandemic.

The businessman ran into so many challenges and technical problems while doing business, from building a network of supply partners to getting to know a sea of administrative forms relating to the import of commodities.

Japanese is a big obstacle as Thoan just used English for working many years before.

“This is my first foray into the business of importing fruits and vegetables,” Thoan admitted.

“In the early days, I had to pay so much ‘tuition’ for my inexperience."

Thoan is not a stranger to the Japanese market, which is both difficult and appealing to any entrepreneur.

The capability to survive the COVID-19 pandemic with a new direction does not mean that Thoan can remove all obstacles now.

“In fact, Vietnamese bananas are better than Philippine ones, but the price of our nation’s bananas is rather higher than the latter,” he explained.

“For example, a shipping container of Vietnamese bananas fetches around US$13-14 while a Philippine rival costs just $6-7, so we sell a smaller amount of goods because of the price."

In the hope of finding ways to deal with this issue, Thoan began to import some other kinds of fruit such as dragon fruits and durians from Vietnam.

He plans to sell more fruits and vegetables from Vietnam next month in case of finding reliable sources of products.

“In Japan, there are a few small companies like JV Solutions that can directly ship fruits from foreign farms, so this is one of my business’s competitive edges,” Thoan said and assured proudly that his firm is the biggest distributor of rambutans from Guatemala in Japan.

“Currently, we can only survive, not making a lot of profit,” said the businessman.

“But I feel happy to be able to keep my company running during the pandemic.

"We made some plans for next stages when I believe the COVID-19 would phase out."

In an exchange with Tuoi Tre, Ta Duc Minh, a trade counselor of the Vietnamese Embassy in Japan, said that many Vietnamese entrepreneurs in the East Asian country can survive the COVID-19 pandemic due to their adaptability.

Thousands of Japanese entrepreneurs have gone bankrupt because of the long-lasting epidemic, Minh said.

Despite the challenging situation, many Vietnamese businesses in Japan, including JV Solutions, could overcome the difficult period thanks to their determined changes and quick adaptation, he added.