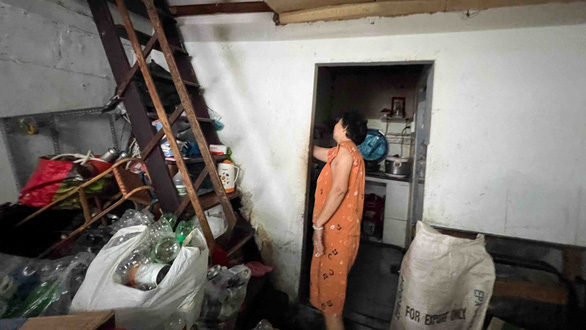 With limited savings, many people prefer tiny houses measuring from 10 square meters each in inner Ho Chi Minh City instead of apartments in suburban areas.

Many homebuyers said that they choose such houses despite their narrow size, as they are near their workplaces and their children’s schools.

This segment still has its own market share, with customers buying such houses for living or earning profits.

“My friends wonder why I did not buy an apartment with my savings, but I prefer a house,” Dao said.

“My mom will later live with me and old people prefer land-attached houses.”

She has been living in a dozen rented rooms for more than a decade with the room rental plus water and electricity bills totaling nearly VND5 million ($215) per month.

“Living in rented rooms for my whole life is impossible,” the woman said.

“We must accept risks to be able to buy houses as we cannot wait until we have enough money.

“I have been spending all my spare time having a look at houses valued below VND3 billion [$129,059] in Binh Thanh or Tan Binh Districts, which are near my workplace.”

Meanwhile, Vo Ngoc Tuan, a 40-year-old dweller in Phu Nhuan District, has an old apartment and wants to sell it to buy a house.

“I like designing and changing the living environment,” he said.

“Having lived in an apartment for a long time, I want to find a small house and renovate it.

“I prefer quiet areas with spacious alleys because of my fear of fire.”

“You can find an appropriate house if you are patient,” she said.

“I bought a house to open an online shop selling utensils for cats.

“With a land-attached house, the goods delivery will be more convenient.

“It is also a pride to buy a house in the inner districts.”

It is not simple to find a small house. Tuoi Tre (Youth) newspaper reporters acted as those who wished to buy an affordable tiny house and the search took a lot of effort.

“It measures 10 square meters and costs only VND1.5 billion [$64,545],” N., who called herself the owner of a house on Banh Van Tran Street in Tan Binh District, said while taking the reporters to the house.

“I have repaired it.

“With such financial capacity, it is hard to find such a house as mine.”

The width of the house fits only a small mattress.

The journalists continued their hunt, dropping in to view a 19.9-square-meter house valued at VND2.2 billion ($94,711) on Hoang Van Thu Street in Tan Binh District.

In reality, it is a deteriorating house sharing a wall with another with a shaky attic in a narrow alley.

After visiting five to six houses measuring 10-20 square meters each in Tan Binh District, the reporters made an appointment with broker Van Tai, who is experienced in trading tiny houses in Binh Thanh and Phu Nhuan Districts.

After squeezing into alleys, your correspondents stopped in front of a house on Vu Tung Street in Binh Thanh District, where neighbors were singing karaoke loudly.

“You should buy it now as it might fetch VND3 billion [$129,059] right ahead of Tet,” Tai said, referring to the Lunar New Year festival.

Arriving at another house down an alley on Co Bac Street in Phu Nhuan Street, the reporters were shocked at its length of a mere 2.5 meters despite the seven-meter width.

Coming to Go Vap District, the journalists saw houses in small alleys which are difficult to find even though they are larger and fetch lower prices.

“With such prices, there are only houses in narrow alleys,” a broker named Quang Trang said.

“Houses in larger alleys could be found in outlying Binh Tan District or District 12 only.

“Is it easy to sell this house after buying it?” – “You can buy it for living or leasing. If you find a better one, you can sell this one or we will help you sell it.”

Despite many weaknesses, pint-sized houses remain attractive to speculators and homebuyers.

Hong Hanh, 54, saw brokers taking homebuyers to a VND2.65-billion ($114,072) house with a width of two meters and a length of seven meters in an alley on Nguyen Thuong Hien Street in Phu Nhuan District by chance.

After having a look at the house, she said she would meet its owner to buy it for her children.

“My acquaintances have also warned of legal risks of these tiny houses but I still decide to buy such a house,” Hanh said.

Speculators prefer dividing their capital into small amounts to buy many tiny houses instead of a large one.

Thanh Le, who trades small-sized houses, said he connected a group of brokers whose job is to seek tiny houses.

“The payment for these minute houses will be made more quickly and the profit will be higher.”

However, regardless of buying these houses for living or investment, the segment has left bitter lessons, Le added.

There are only gullible buyers, no unwise sellers.

“With attractive prices, houses must be located in small alleys,” Le shared.

“Many of them have dubious legality, such as sharing a land use right certificate, involving hand-written documents, being involved in disputes or being mortgaged at banks.

“Some people have been put at a disadvantage as they have bought houses whose land was taken back for projects.”

In addition, many people have hurriedly bought houses with unfavorable feng shui, such as having unequal widths in the front and at the back, being located in a T-junction or its main door facing an alley, so it is difficult to find new owners for them.

Therefore, homebuyers must carefully get information, and ask sellers or brokers to send photos and legal documents of houses before having a look at them.

It is noted that the small area of the house is not synonymous with low prices.

Many people who have modest funds and do not want to be burdened with debts have still decided to buy these houses although the price is VND200-300 million ($8,602-12,926) per square meter.

Therefore, the experienced have advised against making payments hurriedly.

Homebuyers should visit many houses to find out average prices and make comparisons and should not believe in brokers’ lip service to make deposits.

Careful learning is a must

According to Le Hoang Chau, chairman of the Ho Chi Minh City Real Estate Association, buying tiny houses is an investment trend and a real demand.

Those intending to buy these houses need to study their legality and the planning information to know if they are inside the boundary of any project.

Under the prevailing regulations, tiny houses can be rebuilt based on their primitive state, such as including two floors. Therefore, the ownership of these houses is limited.

This segment is appropriate to new companies as they require a small investment.

Buyers can upgrade and resell them, or buy and merge two to three adjacent tiny houses to have a larger one.