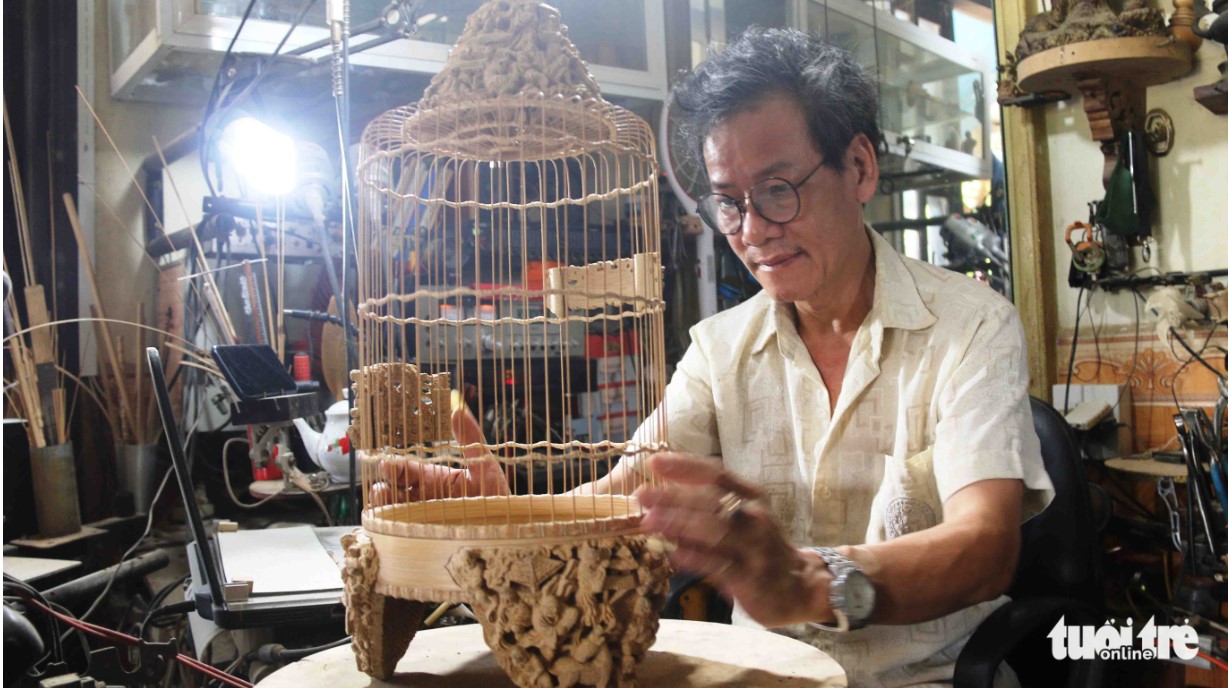 Vietnamese man crafts bamboo birdcages for up to $10,000 apiece

Doan Minh Can, a 56-year-old artisan from Phu Duong Commune, Hue City is known for designing unique, handcrafted birdcages worth over VND230 million (US$9,827) each.

Can’s one-of-a-kind birdcages have garnered such renown over the years that visitors from near and far make trips to his once-sleepy village to catch a glimpse of his unique works.

"Each birdcage I make is one of a kind," said Can, who hopes his newfound fame will help transform Phu Duong Commune into one of the newest tourist attractions in Hue, the capital of Thua Thien-Hue Province in central Vietnam.

"They can’t be copied because they are completely handmade."

The most ornate style of birdcage Can produces is called Thap Bat La Han (Eighteen Arhats) – a name which pays homage to those Buddhists who have found spiritual enlightenment.

Each of these cages features hand-carved bamboo panels created with stunning levels of detail and accuracy.

Can’s sophisticated carving skills are the product of nearly three decades of practice.

Once a well-known carpenter, a lumber shortage in the community forced Can to move away from traditional woodwork and begin working with bamboo. Of course, making the switch was a serious adjustment for him.

"The small chisels I used for wood were not suitable for bamboo. I had to learn to carve with new, special chisels that were meant only for bamboo," Can explained.

Eventually, he mastered the art of bamboo carving, began creating birdcages and, by the end of the 1990s, his unique bamboo cages were selling for VND10 million (US$427) to VND40 million ($1,709) each.

Though Can’s work had earned him a solid reputation in the woodwork world, it was not until the 2009 Vietnamese Handicraft Village Festival in Hue City that he officially turned the corner from 'well-known' to 'renown.'

At the festival, guests were so overwhelmed by Can's Thap Nhi Hoa Giap Quan Tien (Twelve Flowers with Fairies) cage that he took home first prize in the event’s National Arts and Crafts competition.

Can considered his success at the festival a true turning point in his career.

"After [I won] the award, a Thai man known for breeding birds visited me at home and asked me to create a birdcage similar [to the cage that won the National Arts and Crafts award],” Can recounted.

"After I explained to him that each cage was hand-carved and couldn't be recreated, he agreed to let me make him a new design and wound up buying it for about $10,000.

"I don’t remember the price of gold at the time, but I remember my wife used the money to buy several taels of gold [1 tael equals 37.5 grams]."

The talented artisan showed your correspondents the birdcage named Thap Bat La Han, which is being made and will be shipped to the U.S. soon.

He said he has sold thousands of birdcages to many countries in recent years, most of them to the U.S., France, Japan, and Thailand.

"My birdcages are unique because they are handmade," Can said.

"I have spent years teaching others how to make such distinctive bamboo birdcages.

"I also work with a few people who create birdcages from wood, which is easier than making ones from bamboo.

"Many of these people are able to make a living from selling their work to customers nationwide."

Can’s fame has boosted his business so much that he now employees 10 other craftsmen and his house has become somewhat of a 'must-see' tourist attraction in Hue, with visitors from all over the world making their way to his workshop to see his unique birdcages up close.

He welcomes these guests and even takes the time to show them various carving techniques.

Now, with business finally recovering following a two-year COVID-19 shutdown, Can has his sights set on the future.

"I have never before charged a fee to visitors, but I now want to charge a service fee for them to see my carvings and to even try making birdcages for themselves," Can explained.

"I plan to use these fees to pay for scholarships and training, or to help people in need.”

Can also works to transform his village into a true craft village – an idea which has garnered enthusiastic support from Hue authorities.

According to Ha, Can's wife, the Phu Duong Commune People's Committee has plans to help the family obtain a 200-square-meter plot of land near a local community house that will serves as a workshop and exhibition space.

In order to help make this dream a reality, Can spends a great deal of time teaching bamboo-carving techniques to other artisans.

"I hope we can build a bamboo birdcage artisan village that can be passed down to future generations," he said.

"Why does our country have so many excellent artisans, but not the same level of quality craft villages they have in China, Thailand, and South Korea?

"Their products are not always as good as ours, but they are better than us at selling visitors on the products and the stories that surround those products.

Dang Phuoc Hoa, 24, is one of Can's apprentices.

Despite his young age, Hoa has been learning from Can for eight years.

The young artisan understands his teacher's desire and ambition, and holds a dream of, one day, possessing the same level of skill.

"I already have the basic skills, but my [birdcages] are not so creative and exquisite as Can's," said Hoa.

"My first attempts at carving all needed to be corrected by Can.

"It is such a difficult craft, but if Can can do it, I can do it too."