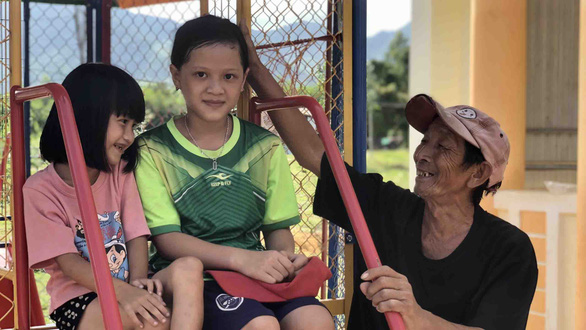 Preschool children of the Cor ethnic minority in central Vietnam got to kick off their new academic year in a freshly built school earlier this month. They no longer have to study on a borrowed premise.

The new kindergarten in Tho An Village, Binh An Commune, Binh Son District, Quang Ngai Province was built on a piece of land donated by 73-year-old Bui Van Anh, a resident of Binh An Commune.

The old man lives in his worn-out country house.

Adjacent to a major road in the ward, the property boasts a fine location in the commune.

Giving up over 1,000 square meters of valuable land, Anh came under tons of criticism.

According to his neighbors, the man could have earned over hundreds of millions of dong (VND100 million = US$4,200) from this project.

They believed he would lose everything following his decision.

“They might think that I was out of my mind, but we always have two choices – either for us, or for others,” he said.

“I donated my land hoping the younger generations can have a better place for their education, and this is for everybody, too.

“I believe my decision is well justified.”

Ngo Ai Phuoc, a school principal in the area, said, “Without his compassion, we [the teacher and her children] will be in ceaseless difficulty."

“For those teachers working in remote areas, we are deeply grateful for Anh."

Despite the overall increasing growth rate of Binh Son District, Tho An remains a recognized area of poverty according to national standards.

It used to be a military base during wartime.

The majority of its population are the Cor ethnic people, who prioritize making money over schooling.

This results in enormous hurdles to education.

In an attempt to encourage early education, the kindergarten of Binh An Commune had to borrow one room inside Binh An Elementary School as a makeshift premise for the preschool children of Tho An Village.

As he passed by this standalone kindergarten class on his daily trips to work, Anh noticed the inconvenience the kindergarteners had to go through in their learning efforts.

Deep inside, he was struck with an overwhelming desire that the children could learn in a more conducive environment.

“For kindergarten children, a clean and pretty room is very important. They also need a playground,” he said.

“It doesn’t make sense to confine the kids to a tiny room with their teachers.

“I couldn’t bear every time I witnessed rainwater seeping into their classroom.”

Over the years, the old man carried with him a strong desire to help the children.

Financially incapable, the man kept his concerns to himself and had conversations with his family members about the unsuitable kindergarten classroom setting.

In 2021, the authorities announced a sponsorship of VND500 million ($21,243) to construct new classrooms for Tho An Kindergarten.

Anh was over the moon to learn of the funding and quickly visited the People’s Committee of the ward for more information.

After verifying all the facts and requirements, they discussed the best locale for the new school.

It was not a matter of the size of the land, but the parents were too busy to send their children to school regularly on a daily basis.

In other words, it is the older siblings of the preschool kids who are in charge of the daily drop-off and pick-up.

Therefore, placing the kindergarten away from the elementary school would be unrealistic.

“My land is next to the [elementary] school, but it would cost a lot to compensate me if they purchased my property,” said Anh.

“So I decided to offer it for free for the education of the younger generations.”

Anh was not an indigenous member of this locality. He joined a pioneering group of settlers to this area over 30 years ago.

He and his family members had to struggle against underground mines and wild plants.

The terrain of the place was full of rugged rocks, taking extra time to convert it to productive land.

The location was suitable for both residency and business; however, the man gave it up for the sake of education.

“Only with a school can there be literacy. Only with education can this community become better,” he said.

“Without sufficient knowledge, the young generations will end up doing the same work as their predecessors.”

Twenty years ago, Anh once donated an area larger in size for use as a path connecting Tho An Village to the center of the commune.

That decision brought his fellow villagers closer to the outside world.

This time, the land he donated would inspire and educate the future generations.

This year is the children’s first time learning in a finely constructed school, and Anh was eager to attend the school opening ceremony earlier this month.

He yearned to see the concerns in the children’s eyes disappear.

A few days before the opening ceremony, Anh rode his old motorbike to the Tho An standalone kindergarten class.

Some of the children were having fun on the slide and seesaw.

As the children greeted him with a slight bow, Anh responded with a smile on his face and funny remarks.

According to Anh, this place is not just a learning hub, but a fun playground for the communal children.

They were reluctant to go to school before, but now they arrive every single day. That added to his overall satisfaction.

To him, donating his land is like a thank-you note he kept for the place that had him and his family covered for decades.

“I’m old now and may pass away any time; the money will be gone too. But this school will always remain,” he said.

Against the odds, the school now meets all the required standards according to the national guidelines for kindergartens.

“Both the parents and the teachers were extremely happy and eager to attend the school opening ceremony,” said Phuoc.

“The opening day was full of emotions and it will open new doors to kindergarten teaching in Tho An Village.”

As a way to honor Anh’s selflessness, the school management decided to integrate stories about the man’s act into the training program.

Phuoc hopes that such stories will remain in the children’s hearts.

The local people lovingly call the new kindergarten ‘Mr. Anh’s school.' The place more often goes by that title than its official name.

In the Vietnamese countryside, places named after a major benefactor is a common practice.

It is a token of gratitude toward that very person.

According to Vo Thanh Tuan, chairman of the People’s Committee of Binh An Commune, it is an honor for the neighborhood to have Anh as its member.

His donation removed the major hurdle to the kindergarten project – the premise for the school.

For the sake of public benefits, Anh forfeited his personal gains.

Inspired by Anh’s generosity, a house owner next door donated over 400 square meters for use as a schoolyard.

Tuan informed that Anh’s family is not well off. They lost a large sum following his act of philanthropy.

The local authorities and people are in debt to them.

“To pay back his compassion and responsibility, the authorities offered him rewards and publicly announced their sincere thank-you to him on the public speaker, so that every single person in the ward is aware of this,” said Tuan.

“The story of Anh, who gave up his land, will be told to future generations. It is a good example for everyone so that the power of the community can be boosted, especially in this land of poverty.

“We are truly grateful to him.”