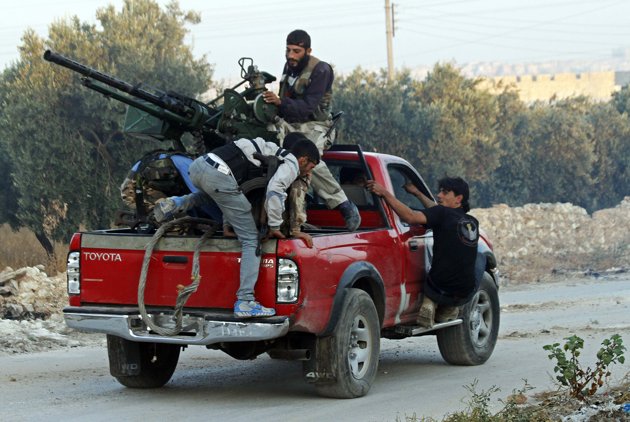 BEIRUT - Thousands of Syrian rebels have broken with the Western-backed coalition and called for a new Islamist front, undermining international efforts to build up a pro-Western military force to replace President Bashar al-Assad.

Ever more divided on a battlefield where Assad's better armed troops have been gaining ground, allies of the Free Syrian Army (FSA) were among 13 disparate rebel factions to disown the exile leadership and build an Islamic alliance that includes the al Qaeda-linked Nusra Front, commanders said on Tuesday.

Details of the numbers of fighters involved and of how they would cooperate remained unclear. But, in an online video, a leader of the Islamist Tawheed Brigade said the bloc rejected the authority of the Syrian National Coalition (SNC) and the Western- and Saudi-backed exile administration of Ahmad Tumeh.

A spokesman for Coalition president Ahmed Jarba, who was attending the United Nations general assembly in New York, said Jarba would head for Syria on Thursday to respond: "We are not going to negotiate with individual groups. We are going to come up with a better structure for organising the fighting forces," the spokesman, Loay Safi, said.

The move is a setback for foreign leaders trying to bolster more secular rebel groups and to reassure voters sceptical of deeper involvement in Syria's civil war. Some may think again about help for the fighters, which ranges from weaponry from the Gulf to non-lethal aid from Europe and the United States.

For Assad, already cheered by Russian diplomatic assistance that undermined U.S. plans to bomb his forces following a poison gas attack, any more powerful rebel coalition could challenge his army's resurgence in the field. But that could be more than offset by a weakening of international backing for his enemies.

Though some moderate Islamist fighters denied the move meant a more radical, sectarian approach, a more visible role for Islamist radicals at the expense of the SNC may bolster Assad's argument that the alternative to his rule, based on his father's military takeover four decades ago, is a Syria run by al Qaeda.

The most hardline Islamist militant faction, al Qaeda's Islamic State of Iraq and the Levant (ISIL) which has brought growing numbers of foreign jihadists into Syria, was not a signatory to the new pact. It was unclear, however, whether it had rejected involvement or had not been invited to join.

The 13 groups signed a statement calling for the opposition to Assad to be reorganised under an Islamic framework and to be run only by groups fighting inside Syria. Signatories range from hardliners like the Nusra Front and Ahrar al-Sham to more moderate groups such as the Tawheed Brigade and Islam Brigade.

"These forces feel that all groups formed abroad without returning to the country do not represent them, so the forces will not recognise them," said the statement read online by Abdulaziz Salameh, the political leader of the Tawheed Brigade.

"Therefore the National Coalition and its supposed government led by Ahmad Tumeh do not represent them and will not be recognised," he said.

Analyst Aron Lund wrote on the blog Syria Comment: "If the statement proves to accurately represent the groups mentioned and they do not immediately fall apart again, it is a very big deal.

"It represents the rebellion of a large part of the 'mainstream FSA' against its purported political leadership, and openly aligns these factions with more hardline Islamist forces."

Since the 2-1/2-year-old revolt against Assad began, Syria's opposition forces have been riven with factionalism and rivalries. There have also been tensions between Islamist groups and those that support a secular vision for a post-Assad Syria.

Assad, and his Russian allies, have highlighted how a revolt that began in 2011 with demands for democracy has seen the rise of sectarian hatreds between the Sunni Muslim majority and Assad's Alawite sect. That also worries other minorities in Syria's complex society, including Christians and ethnic Kurds.

Gulf Arab support for the rebels has highlighted the war's role in a broader regional confrontation between Sunnis and Shi'ite Iran, which backs Assad and Shi'ite Arab movements.

Rebel fighters and opposition activists rejected the portrayal of the statement as a blow to moderate forces, however. They saw it rather as a unification of rebels on the ground while sidelining the small but powerful ISIL.

"There is a lot of distortion of the rebel movement ... This is not a blow to the moderates," said a fighter from the Islam Brigade, who did not want to be named when criticising al Qaeda.

"The front is divided between the radical groups who follow ISIL and the others who are Islamist but accept minorities and want to follow a more moderate Islamist interpretation for the country. This does not change that."

The anti-FSA shift may also be territorial - most of those who signed up to the new bloc are from brigades in northern Syria, where the opposition holds large swathes of territory.

No major forces from eastern and southern Syria appear to support it. Deraa, on the border with Jordan, is the main transit point for supplies from Western and Gulf countries. The presence of hardline Islamists there is much weaker.

A figure in the Free Syrian Army's command said the announcement had taken its leadership by surprise.

"I don't even know what to say," he said, speaking on condition of anonymity. "There were some very important factions who joined. And from my perspective, they gave no warning."

He said FSA commanders were meeting to discuss the statement and may try to negotiate with their former partners.

Khaled Khoja, representative of the Syrian National Coalition in Turkey, estimated the 13 groups had around 20,000 fighters and said they effectively controlled northern Syria.

He said their move may have been prompted by a lack of consultation by the Coalition when it announced its formation of an interim government this month led by Tumeh. But he hoped they might still be persuaded to change their minds.

"This situation can still be solved through recognition of those brigades, allowing them to participate in the decision-making and providing them with support," he said.

"We have ignored them for 2 1/2 years even though they were the most effective groups."

"It is likely that the moderate Islamist coalition has ceased to exist as a single organisation structure," he said.

Islamist forces grew in power as the Syrian conflict changed from peaceful protests into an armed insurgency after a fierce crackdown by Assad's forces. Militant groups, some linked to al Qaeda, have become even stronger in the ensuing civil war.

"These forces call on military and civilian forces to unite under a clear Islamic framework based on Sharia law, which should be the sole source of legislation," the statement said.

Whatever their ideological background, many opposition groups inside Syria are sceptical and resentful of the SNC.

Critics accuse it of not being transparent with funding and in its political processes. They say it is out of touch with people in Syria, where more than 100,000 have been killed and swathes of territory have been destroyed by combat and shelling.

Some Nusra Front fighters and supporters who spoke to Reuters said Nusra and its allies had been courting moderate rebels as they watched their relationship sour with the SNC.

Saudi Arabia, which had taken over as the main foreign player and financier of the SNC, had been trying to sideline Islamists in favour of bolstering secular forces.

"Our brigades are tired of the SNC strategy, it is acting on the exterior and ignoring the interior. And a lot of the moderate Islamists were shoved aside when Qatar's role was overtaken by Saudi Arabia," one Nusra supporter said. "Saudi started aggressively supporting the secular groups."