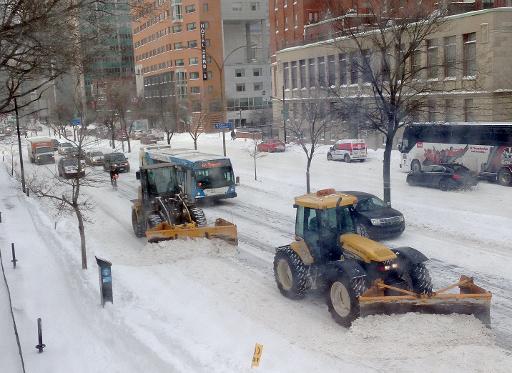 As much as 40 centimeters (16 inches) of snow fell from Wednesday afternoon to Thursday morning in parts of Canada's Ontario, Quebec and Maritime provinces.

The Canadian Weather Office warned of dangerous blizzard conditions, after the region saw a sudden drop in temperatures accompanied by strong winds.

In Toronto, Montreal, Ottawa, Halifax and Quebec City, nearly all flights were delayed or cancelled, according to airport authorities.

Some 20 cars were involved in a highway crash between Woodstock and Kitchener, Ontario on Wednesday, but authorities said there were no serious injuries. Police blamed low visibility and slippery roads.

The Weather Office predicted a gradual improving of conditions on Thursday.

"An intense low pressure system near Nova Scotia will reach Newfoundland this evening," it said.

However "very cold temperatures" were expected in northern Quebec, with wind chills near minus 40 degrees Celsius (same in Fahrenheit).