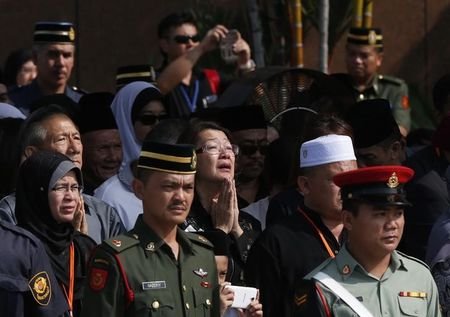 BERLIN, Sept 21 - Relatives of German victims of downed Malaysia Airlines flight MH17 plan to sue Ukraine and its president for criminal negligence for not closing the country's airspace, a lawyer said Sunday.

Elmar Giemulla, an attorney and professor of aviation law who is representing three German families, said he would file suit soon before the European Court of Human Rights in Strasbourg.

"Every country bears the responsibility for the security of its airspace," he wrote in a statement sent to AFP.

"By keeping its airspace open for transit by aircraft from other countries, the state must ensure the safety of the flights. If this is temporarily impossible, it means that it should close its airspace."

The Malaysia Airlines Boeing 777 exploded over insurgent-held east Ukraine on July 17, killing all 298 on board, 193 of them Dutch.

Four were German, according to the airline.

The findings of an initial report by a Dutch-led team of air crash investigators appear to back up claims that the plane was hit by an anti-aircraft missile.

Kiev and the West have accused separatists of shooting it down with a surface-to-air BUK missile supplied by Russia -- a charge Moscow denies.

Giemulla told AFP in an email he would file the lawsuit against the Ukrainian government and President Petro Poroshenko alleging 298 counts of manslaughter by negligence in about two weeks, and seek damages for pain and suffering of at least one million euros ($1.3 million) per victim.

He said the litigation would not target Russia as "the evidence was not yet sufficient" but added that he did not rule out launching a lawsuit against Moscow in future.