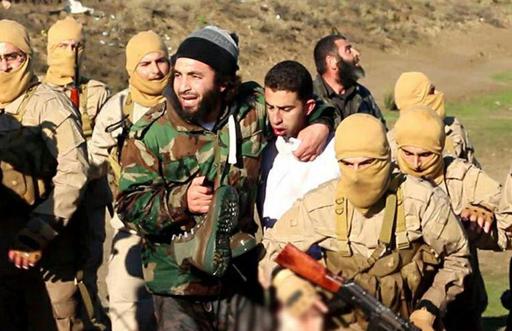 IS downs warplane over Syria, claims capture of Jordan pilot

The Islamic State group on Wednesday shot down a warplane from the US-led coalition over northern Syria, a monitoring group said, with the jihadists claiming to have captured a Jordanian pilot.

"We have confirmed reports that IS members took a (non-Syrian) Arab pilot prisoner after shooting his plane down with an anti-aircraft missile near Raqa city," the Syrian Observatory for Human Rights said.

The IS branch in Raqa published photographs on jihadist websites purporting to show its fighters holding the captured pilot, with a caption identifying him as Jordanian.

Several photographs were released showing the pilot, wearing only a white shirt, being carried from a body of water by four men, and also on land, surrounded by about a dozen armed men.

Another photograph was released of the pilot's alleged military identification card, showing his name as Maaz al-Kassasbeh, his birth date as May 29, 1988, and his rank of first lieutenant.

The jihadists claimed to have shot down the warplane with a heat-seeking missile.

The Britain-based Observatory, which relies on a wide network of sources inside Syria, said IS had used a missile taken from Syrian rebels who have been battling President Bashar al-Assad's regime.

IS "has a large number of anti-aircraft weapons taken from the rebels," Observatory director Rami Abdel Rahman told AFP.

There was no immediate reaction from authorities in Jordan.

Jordan is among a number of countries that have joined the US-led alliance carrying out air strikes against IS after the jihadists seized control of large parts of Syria and Iraq.

Saudi Arabia, the United Arab Emirates, Jordan and Bahrain are taking part in the air strikes in Syria alongside the United States.

Australia, Belgium, Britain, Canada, Denmark, France and The Netherlands have joined the raids in Iraq.

The Sunni extremist IS has committed widespread atrocities in areas under its control, including mass executions of captured soldiers and public beheadings of hostages including Western journalists and aid workers.

Coalition warplanes have carried out regular strikes around Raqa, which IS has used as the headquarters for its self-proclaimed "caliphate".

The Observatory said on Tuesday that coalition strikes had killed more than 1,000 jihadists in Syria since they started there on September 23.

In its latest update on the operation, the US military said coalition aircraft had conducted seven raids in Syria and three in Iraq on Tuesday.

In Syria, six strikes hit IS positions near the embattled town of Kobane near the Turkish border, where Kurdish militia are fighting the jihadists, while one targeted an IS oil facility near Barghooth.

Syria's conflict began in 2011 as a peaceful revolt against Assad but evolved into a multi-front civil war that led to the emergence of IS and its expansion into Iraq.

Assad's regime has also carried out frequent air strikes on Raqa that have killed large numbers of civilians.