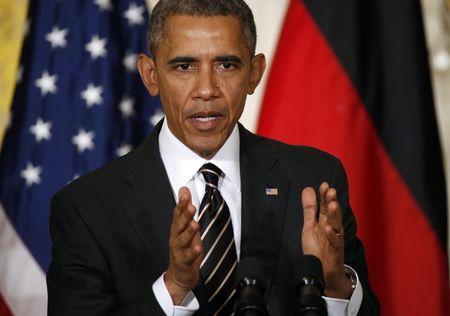 WASHINGTON - U.S. President Barack Obama sent Congress his text on Wednesday for an authorization to use military force in the campaign against Islamic State, limiting operations against the militants to three years and barring use of U.S. troops in "enduring offensive ground combat."

According to the text, Obama also wants to repeal the 2002 measure that authorized the Iraq war. But his proposal leaves in place a 2001 authorization, passed shortly after the Sept. 11 attacks, for a campaign against al Qaeda and its affiliates.

Obama said he remained committed to working with Congress to "refine, and ultimately repeal" the 2001 AUMF. He said enacting a measure specific to the campaign against Islamic State fighters could serve as a model for revamping the 2001 measure.

"I have directed a comprehensive and sustained strategy to degrade and defeat ISIL," Obama wrote in a letter accompanying the draft, using an acronym for the Islamist militant group.

"Local forces, rather than U.S. military forces, should be deployed to conduct such operations," he said.

Obama's proposal must be approved by both the U.S. Senate and House of Representatives, where it is expected to provoke strong debate between Democrats, who are generally wary of another Middle East war, and Republicans, many of whom have been pushing for stronger measures against the militant fighters.

Obama has defended his authority to lead an international coalition against Islamic State since Aug. 8 when U.S. fighter jets began attacking the jihadists in Iraq. But he has faced criticism for failing to seek the backing of Congress, where some accuse him of breaching his constitutional authority.

Facing pressure to let lawmakers weigh in on an issue as important as the deployment of troops and chastened by elections that handed power in Congress to Republicans, he said in November he would request formal authorization for the use of military force (AUMF).

Secretary of State John Kerry, who spent nearly three decades in the U.S. Senate, said in a statement it was important that the administration work with Congress to secure its passage. The coalition fighting Islamic State will be stronger if it is passed, he said.

"The world needs to hear that the United States speaks with one voice in the fight against ISIL," he said.