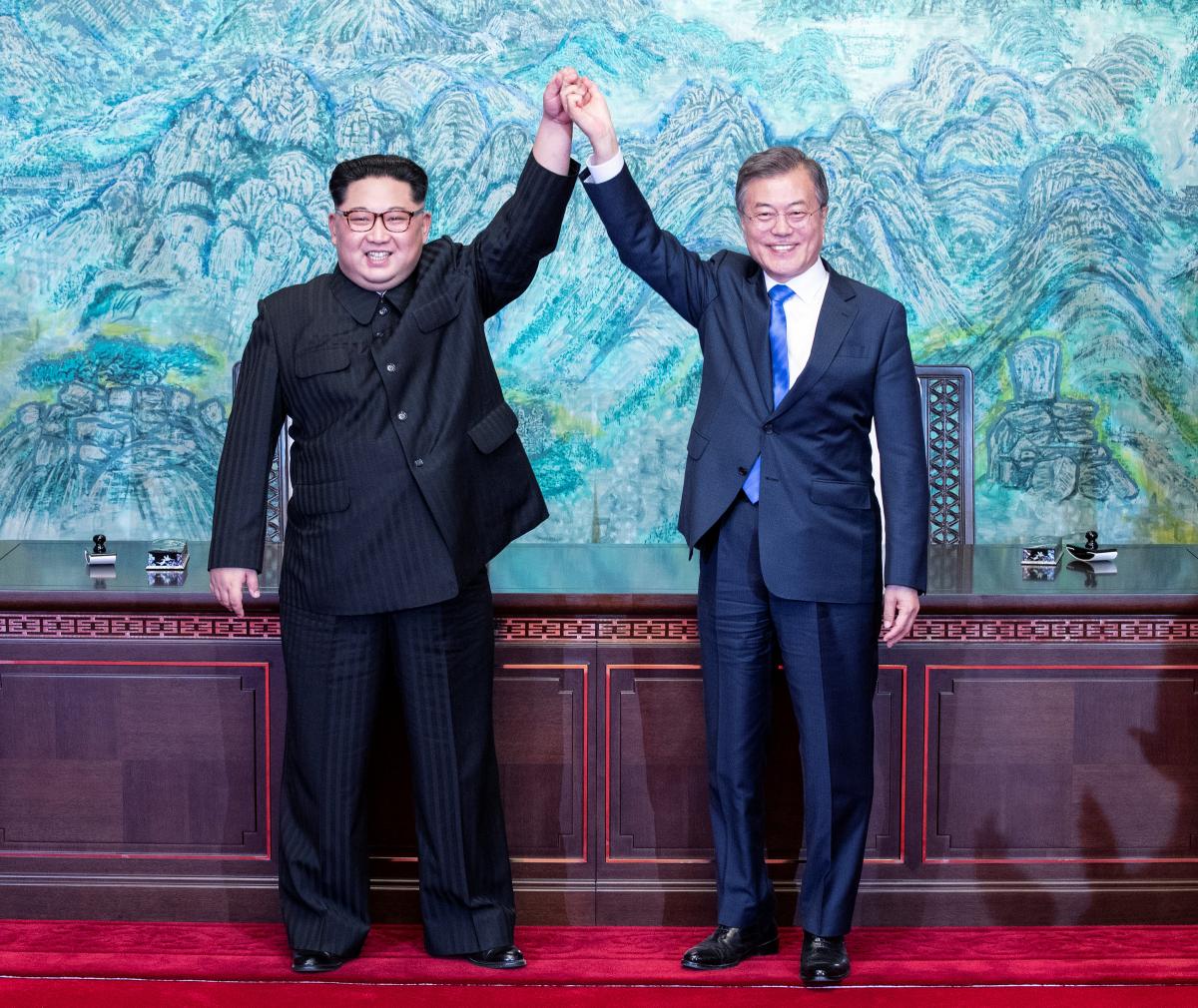 SEOUL - The leaders of North and South Korea embraced on Friday and pledged to work for the “complete denuclearization of the Korean peninsula” on a day of smiles and handshakes at the first inter-Korean summit in more than a decade.

The two Koreas announced they would work with the United States and China this year to declare an official end to the 1950s Korean War.

But their commitments were short on specifics and failed to clear up key questions about Pyongyang’s intentions ahead of an even more critical summit with U.S. President Donald Trump that is expected in coming weeks.

“The two leaders declare before our people of 80 million and the entire world there will be no more war on the Korean peninsula and a new age of peace has begun,” the two sides said.

The summit was held at the village of Panmunjom in the heavily fortified Demilitarized Zone at the border that has divided the Koreas for more than six decades.

But even as the Koreas agreed on a common goal of a “nuclear-free” peninsula, they stopped short of spelling out how that might come about.

The Trump administration defines “denuclearization” as Kim giving up his nuclear arsenal, something he has been unwilling to do. North Korea has historically demanded the United States withdraw its troops and remove its “nuclear umbrella” of support for the South.

Moon agreed to visit the North Korean capital of Pyongyang this year, the leaders said.

Earlier, Kim became the first North Korean leader since the 1950-53 Korean War to set foot in South Korea after shaking hands with his counterpart over a concrete curb marking the border.

Scenes of Moon and Kim joking and walking together marked a striking contrast to last year’s barrage of North Korean missile tests and its largest ever nuclear test that led to sweeping international sanctions and fears of war.

Their meeting was meant in part to lay some of the groundwork for Trump’s meeting with Kim, which would be the first encounter between sitting leaders of the two countries.

Trump, who has exchanged nuclear threats and personal insults with Kim in the past year, welcomed the Korean talks while injecting a small note of caution.

“After a furious year of missile launches and Nuclear testing, a historic meeting between North and South Korea is now taking place. Good things are happening, but only time will tell!” he said on Twitter.

He later added: “KOREAN WAR TO END! The United States, and all of its GREAT people, should be very proud of what is now taking place in Korea!”

China, North Korea’s main ally, welcomed the leaders’ statement and said it was willing to keep playing a proactive role in promoting political solutions. China is wary of being sidelined by a thaw between the two Koreas and by the upcoming summit between Trump and Kim.

Russia said it was ready to facilitate cooperation between North and South Korea, including in the fields of railway transport and energy.

Global markets were lifted by hopes the summit would pave the way for the end of conflict on the Korean peninsula. Shares in Seoul briefly rose more than 1 percent to a one-month high and Japan’s Nikkei share average also gained.

It is not the first time leaders of North and South Korea have declared hopes for peace. Two earlier summits, in Pyongyang in 2000 and 2007, failed to halt the North’s weapons programs or improve relations in a lasting way.

“We will make efforts to create good results by communicating closely, in order to make sure our agreement signed today before the entire world, will not end as just a beginning like previous agreements before today,” Kim said after the agreement was signed.

First across the line

Moon greeted Kim at the military demarcation line where the men smiled and shook hands. In an unplanned move, Kim invited Moon to step briefly across into North Korea, before the two leaders crossed back into South Korea holding hands.

“I was excited to meet at this historic place and it is really moving that you came all the way to the demarcation line to greet me in person,” Kim said, wearing his customary black Mao suit.

“A new history starts now. An age of peace, from the starting point of history,” Kim wrote in Korean in a guest book in the South’s Peace House before talks began.

During a private meeting in the morning, Kim told Moon he came to the summit to end the history of conflict and joked he was sorry for waking Moon up with his early morning missile tests, a senior presidential official said.

Moon and Kim released their joint declaration before a dinner banquet.

Later, with their wives, they watched a music performance and held hands as they watched a montage of photos from their summit set to a K-pop song that included the words “be a family again”.

After warm farewells, Kim was driven back to North Korea.

The United States said earlier it was hopeful talks on peace and prosperity would make progress and it looked forward to discussions with South Korea in preparation for the planned meeting of Trump and Kim in coming weeks.

Just months ago, Trump and Kim were trading threats and insults as the North made rapid advances in pursuit of nuclear-armed missiles capable of hitting the United States.

The United States stations 28,500 troops in South Korea as a legacy of the Korean War, which ended in a truce, not a peace treaty. The war pitted the South, U.N. and U.S. forces against the North, backed by China and Russia.

Kim and Trump are expected to meet in late May or June. Trump said on Thursday he was considering several dates and venues.