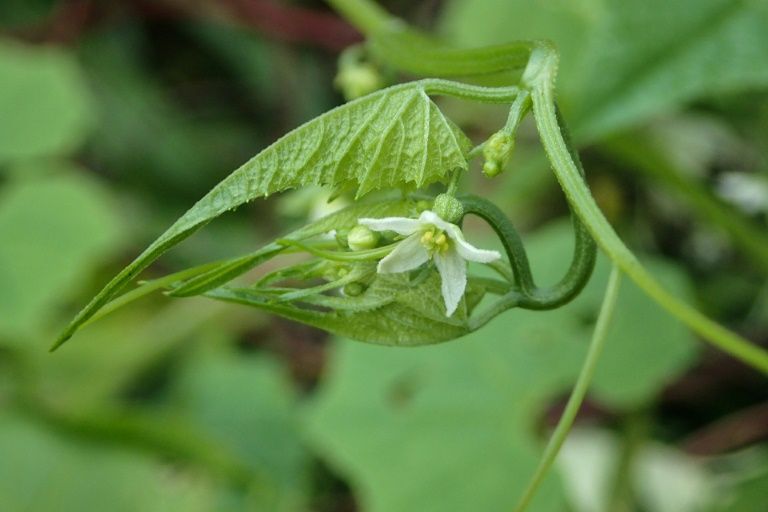 An unusual vine discovered by a 91-year-old volunteer nature guide in Japan has a "unique" way of using its leaves to curl around its fruits to envelop them in a protective microclimate, scientists said on Wednesday.

The cucurbitaceous vine, a type found in East Asia, is an oddity because while leaves come in all shapes and sizes and perform a crucial role in photosynthesis, they are rarely associated with reproduction.

But a new study published in the journal Proceedings of the Royal Society B: Biological Sciences found that the vine had specialised leaves able to enclose fruit and enhance seed production in colder conditions.

The research was co-authored by Nobuyuki Nagaoka, the 91-year-old guide at Yamagata Prefectural Natural Museum Park, who first spotted the leaf behaviour in 2008 and has observed it every autumn since.

Intrigued by the strange leaf "greenhouses", he looked online for information about the vine, said co-author of the study Shoko Sakai, a professor at the Center for Ecological Research at Kyoto University.

"Our newsletter published in 1998 had an article about this plant. He saw the article and sent me a letter in 2008," Sakai told AFP.

He said initially when he saw a picture of the leaf enclosure he thought "it was a maldeveloped or pest-infected shoot".

But "when we read subsequent observation records he sent to us, it became clear that this was an interesting phenomenon worth further investigation," he said, adding that it was only when the researchers examined the real thing that they could confirm what it was.

"When I saw it, I was excited to find out that they were indeed leaves," Sakai said.

The researchers looked at plants at different altitudes at the foot of Mount Gassan, in the southern part of the Dewa Mountains, in an area partly within Yamagata park.

They describe the vine as a slender, annual plant that often inhabits the edges of deciduous forests with disturbances like roads, rivers or mountains.

It can either be hermaphrodite or male and produces small, white flowers pollinated from August to September and later develop into fruits, each with a single seed.

The study, which also included experts from Japan's Forestry and Forest Products Research Institute, reported "for the first time, a unique function of leaves that enclose immature fruits in an annual vine".

They noted some leaves on hermaphrodite plants that were undeveloped in summer "expanded and overlapped with each other" to create a sort of cocoon around immature fruit.

The study found that these specialised "enclosure leaves" are produced towards the end of the growing season and produced a microclimate of up to 4.6 degrees Celsius warmer than was recorded around fruit where the leaves had been plucked off.

Removing the leaf enclosures negatively affected the survival and growth of the vine's fruit, although they were unable to identify the mechanism, said the authors.

They also found that the leaves grew thicker protective layers in colder areas and said the results suggest that the vine enclosures allow the plant to produce seeds under the cold weather the plant encounters at the end of its life.

These enclosure leaves were found to have less photosynthetic ability and were different in greenness and structure from others.

Previous research has described some functions of leaves that aid reproduction, such as the plant Saururus chinensis, whose leaves can temporarily turn white to attract pollinators.

But the study said such traits were likely "in conflict with traits that promote photosynthesis, the primary function of leaves".

"Plants produce many leaves in their lifetime. Size, shape, and thickness among the leaves are often very diverse within an individual," said Sakai, adding that previously this had been viewed in terms of photosynthesis.

"In this study, we found that some leaves play more important roles in reproduction rather than photosynthesis."

The research was Nagaoka's first scientific paper, Sakai said, adding that he was still guiding tours at the park and observing vines.

"I think he should be proud of his paper, but he is very humble," he added.