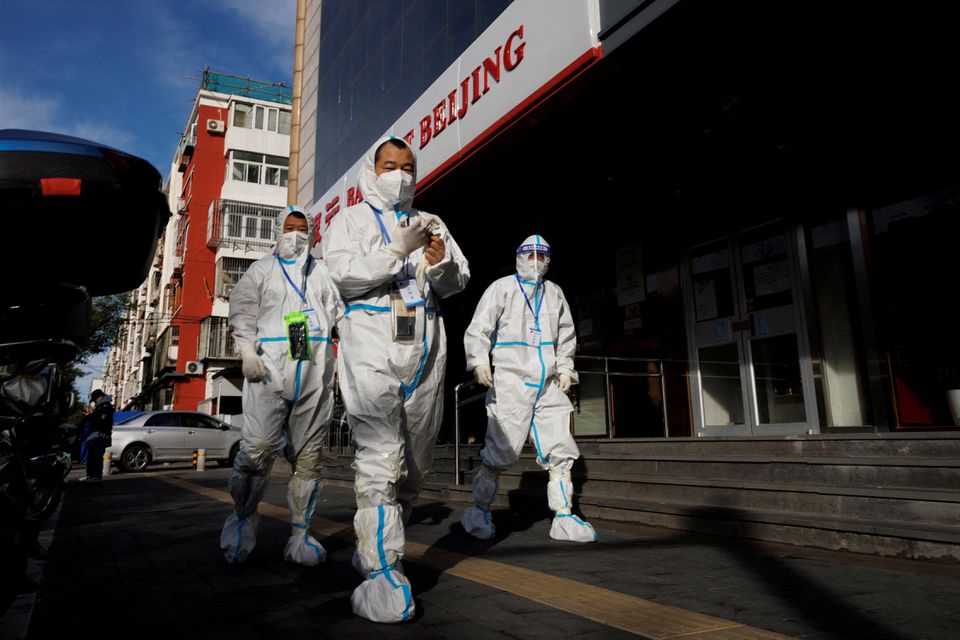 Beijing and several other major cities in China reported record COVID-19 infections on Monday, putting authorities under more pressure to quell outbreaks quickly while also trying to reduce the impact on people's lives and on economic activity.

Nationwide, 16,072 new locally transmitted cases were reported by the National Health Commission, up from 14,761 on Sunday and the highest in China since April 25, when Shanghai was battling with its most serious outbreak.

Beijing, Chongqing, Guangzhou and Zhengzhou all recorded their worst day so far, though in the case of the capital the tally was few hundred cases, while the other cities were counting in thousands.

The case load is very small compared with infection levels encountered in other countries, but China's insistence on clearing outbreaks as soon as they emerge under its zero-COVID policy has increased the impact on communities and on the economy.

On Friday, the National Health Commission updated its COVID-19 rules in the most significant easing of curbs to date, describing the changes as an "optimisation" of its measures to soften the impact on people's lives.

While individuals, neighbourhoods and public spaces could still be subject to lockdowns to prevent outbreaks spreading, the commission relaxed some measures, including shortening quarantine time for close contacts.

Secondary close contacts are no longer identified and put into isolation - a major inconvenience for people caught up in contact-tracing efforts when a case is found.

Areas deemed at risk of wider outbreaks are now categorised as "high" and "low" - eliminating a "medium" category in a bid to minimise the number of people caught up in control measures.

Despite the loosening of curbs, many experts say the measures are incremental, with some predicting that China is unlikely to begin reopening until after the March session of parliament, at the earliest.

"Currently COVID-19 cases are rising in major cities such as Guangzhou and Chongqing, and zero-COVID policy continues, suggesting down-side risks to the near-term growth outlook," said analysts at U.S. investment bank Goldman Sachs in a note on Monday.

According to Goldman Sachs, "the government is likely to start China's final exit from over three years of zero-COVID policy" after the parliamentary sessions in March, assuming all medical and communication preparations are done.

Shares of consumer staples remained subdued on Monday, while stocks in tourism and transport slumped as domestic COVID-19 cases surged and some investors booked profits on previous COVID-19 easing bets.

Beijing reported 407 cases on Monday, compared with 235 the previous day.

In the southern city of Guangzhou new locally transmitted cases hit a fresh high of 4,065, compared with 3,653 a day before.

Chongqing, a southwestern city of more than 32 million people, also saw a jump in cases to 2,297 compared with 1,820 the previous day.