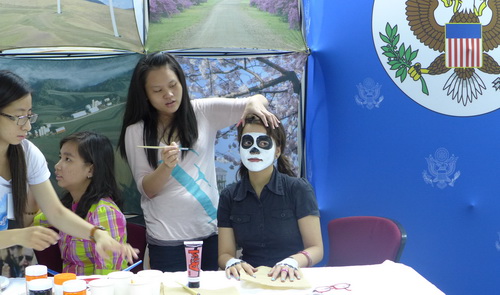 ‘Save the Dugong’ logo design contest has winners

To celebrate the Earth Day on Monday, the US Consulate General in Ho Chi Minh City organized a ceremony to award the winners of “Save the Dugong” Logo Design Contest, starting from April 12th, at American Center on floor eighth of Diamond Plaza in District 1

The first prize for professional designers goes to Le Dieu Bang, from Mythuat24th company in HCMC, followed by Nguyen Thanh Tung in Hanoi.

The winners were awarded iPad Mini and iPod Touches. In addition, one more prize will be given later for a logo most-voted by the audience.

According to Mr. Ray Nayler, the economic officer, this contest is the beginning of a long campaign to raise awareness of the importance of dugongs in Vietnam, due to the fact that this marine mammal is nearing extinction in the country’s waters.

“Dugong is actually an indicator of how well the marine biosphere is doing in Vietnam. If the dugongs cannot survive, many other animals are also threatened. The point is we easily forget these mammals because they live under the water, so we cannot see them”, he added.

“Therefore, at first, we tried to make dugongs more visible by representing them with the logos before starting to educate local people, especially children and students”, he shared.

There are totally 292 contestants taking part, including 184 entries from HCMC, 52 from Hanoi and the rest from other cities, such as Hai Phong, Dac Lac, Da Nang, Nha Trang. The youngest contestant was 10 years old while the oldest was 65.

“Many people didn’t know about dugongs before the contest. However, now we have at least 292 people studying them”, Ray Nayler shared.

All of the entries were reviewed by a group of judges in order to pick up the top 12, which were all exhibited at the presentation ceremony.