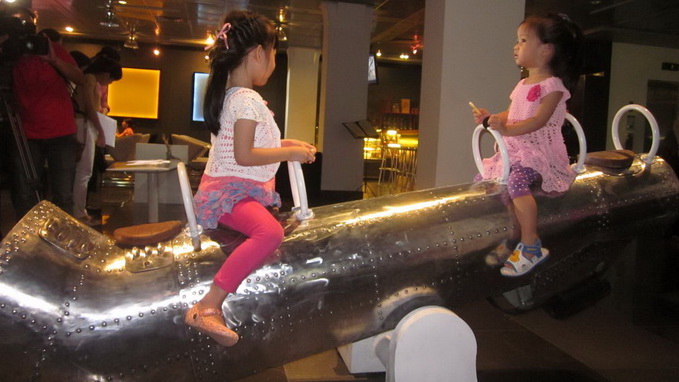 The installation and video exhibit titled “Born in 1983 – Kham Thien,” by local artist Bang Nhat Linh, which features everyday items made from the remnants of war materiel, is running in Hanoi until September 28.

The exhibit, which is being held at L’espace, 24 Trang Tien, Hoan Kiem district, features two sections, an installation and a video screening.

The installation section, called “Weaponry and targets”, showcases daily objects like clocks, flower vases, pipes, hookahs and thermos flasks which are made from war remnants including bullets, bombs, mine shells, and aircraft parts.

A number of treasured photos taken during the wartime years are also on exhibit.

The video screening recounts the story of a veteran who lives in a poor mountainous village along the border of central Quang Tri province. This area saw the most ferocious fighting during the war against the US (1954-1975). After the war ended, the veteran built fish-farming ponds in the countless bomb craters left over from the conflict.

“I’ve nurtured the idea for a long time. I was born and grew up on Kham Thien Street, which is connected to the twelve-day aerial Dien Bien Phu battle and several of the most atrocious fights. After the war ended, the survivors remained haunted by it. Inspired by the stories I heard from them, I came up with the idea of this exhibit,” shared Linh.

He added that among the exhibited items, his favorite is the sea-saw built from a helicopter tail, as it best conveys his idea of turning objects used for war into daily ones, especially kid’s toys.

The exhibit, jointly put on by L’espace and the British Council, is the first in Linh’s war exhibit series.