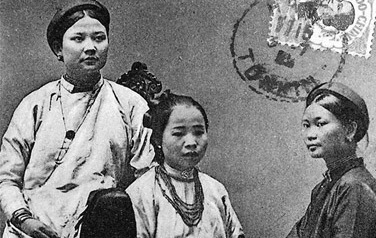 The designer and his ao dai museum

Si Hoang, a celebrated “ao dai” (traditional Vietnamese long gown) designer, is getting closer to his dream of establishing a museum and library of his own to showcase the traditional costume.

Hoang, in his fifties, has single-mindedly dedicated dozens of years to designing only “ao dai” during his career.

He’s also a successful businessman and a  fruitful art lecturer. There’re times when he “retired” and devoted most of his time to his hobbies: collecting pottery, running a ceremonial tea shop which accentuates traditional Vietnamese culture and building his garden mansion in Ho Chi Minh City’s district 9.

Despite the “retreats”, Hoang has always nurtured his dreams. He is now busy getting ready for his “ao dai” museum, the country’s first of its kind.

Hoang has dreamt of building an “ao dai” museum since his college days. During that time, he would frequent several local museums to do his research on the traditional attire, which he has always been passionately in love with.

“The ‘ao dai’ has both aesthetic and ethical values, as the wearer automatically adjusts her words and behaviors, while the opposite person can’t bear resentment or ill will against the wearer,” Hoang noted.

His museum will feature the ups and downs of the “ao dai”. There were times when the costume was considered a luxury item and could be done without.

One of Hoang’s memories with the “ao dai” is that after 1975, his mother had a wardrobe of over 100 pieces of ao dai. In dire times, she had to cut the lower part of the costumes to make clothes for her children.

The museum, to be located within Hoang’s Long Thuan garden house in district 9, is expected to be an appealing tourist destination. He’s now stepping up his preparation for its opening by year end.

Hoang went to great length to seek the “ao dai” which former President Nguyen Thi Binh wore during her office term, or the Le Mur “ao dai” worn by a local artist’s mother.

“My biggest dreams are to build my own museum, library, and theater. The museum and the Xanh library which belongs to it are about to come true. And I’ll start working on my future theater soon,” Hoang shared.