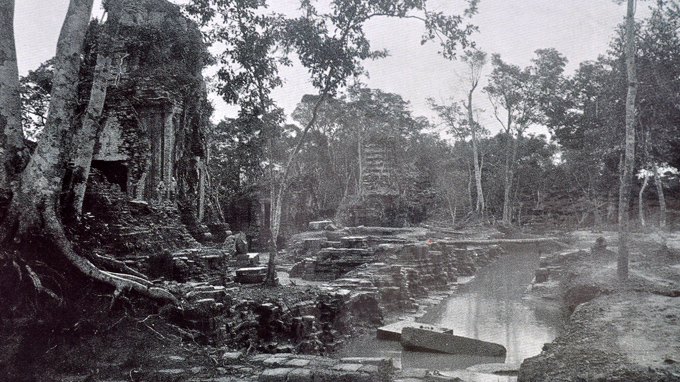 According to the Research Institute of Southeast Asia, prior to its discovery by a group of French archeologists in 1902, the Dong Duong village has two towers standing about 45m apart from each other. One of the two brick towers measures some 12m high and has an octagonal top section and a square base.

The architectural complex measures some 1,330m from east to west and houses a temple in a 300m by 240m fenced enclosure.

There were eight guard towers in total at the Buddhist complex, which were used both for protection and worshipping purposes.

The French unearthed ancient jewelry and a number of other objects from around the towers. Among them is a 1m-high bronze Buddha statue, which is considered by some experts to be one of the oldest and most spectacular in Southeast Asia.

The monastery is the largest Buddhism hub in the Champa Kingdom (around the 7th century to 1832), which was located in what is today central and southern Vietnam. It was also one of the largest of its kind in Southeast Asia.

According to what was written on a stele found at the monastery, King Indravarman 2 built the complex in 875 to worship the Buddha and his reign’s guardian bodhisattva called Laksmindra Lokesvara Svabhayada.

The monastery once fell into oblivion over several centuries and saw serious devastation by military activity and other forms of human destruction.

Some experts say that compared to other Cham ruins like Simhapura in the same province and Vijaya in Binh Dinh province, the Dong Duong Buddhist Monastery boasts the potential to become a globally recognized cultural heritage site.

The complex was recognized as a national cultural relic in 2000.