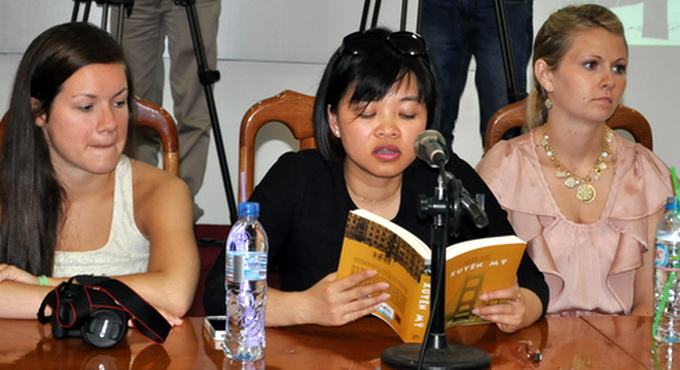 A Vietnamese writer pointed out many differences between Vietnamese and American women in an exchange held at the Vietnam Women's Museum in Hanoi on Wednesday.

The event, in which Vietnamese female writer Phan Viet talked about the differences in terms of career paths and mindsets, was organized on the occasion of the publication of her new book, “Xuyen My” (Journey Through America).

“I did not know how to make up and only focused on studying when I was in Vietnam,” the author shared. “I only knew the feeling of being a woman after getting married and going abroad. Therefore, I have no idea how to be a Vietnamese woman,” she added.

Being a woman in America is much easier, Viet asserted, saying she could spend hours talking with men about numerous social problems that women often care, a thing which is rarely seen in Vietnam.

“In America, nobody asked me if I got married or had any children or not. I was already divorced but no one knew. I did not speak out and they would never ask me as it belongs to one’s private life. However, those are always the top questions everybody asks in Vietnam,” Viet said.

On the other hand, according to an American female student attending the exchange, Vietnamese women are healthier than their American peers as she saw most of the people rowing boats on the Yen stream, which leads to the well-known Huong (Perfume) Pagoda in the southwest of Hanoi, are women, which she has never seen in the U.S.

Another participant stated that the role of women in Vietnam is always important as they often take care of children and have a great impact on the decisions made in their family. However, they often choose to support their spouses’ careers, she added.

The event was organized by Viet and 13 American students and lecturers from the University of South Carolina, who are all taking part in social work.

“Xuyen My” is a sequel to Viet’s memoir “Bat Hanh La Mot Tai San” (Misfortune Is an Asset), talking about the feelings and experiences after the breakdown of her marriage.