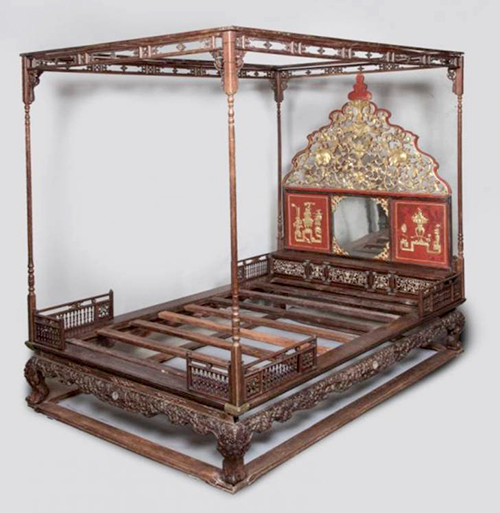 The Hue Monuments Conservation Center recommended concerned authorities on Tuesday to make efforts to bring home two royal treasures, which were put up on auction in France last week.

The two century-old artifacts, a king’s bed and a rickshaw, belonged to King Thanh Thai, the 10th king of the Nguyen Dynasty (1802-1945) - the country’s last monarchy.

He was on his way to join a resistance movement in China when he was arrested by French forces who declared him insane and forced the king to abdicate.

In 1907, his son was enthroned as King Duy Tan. Thanh Thai was then exiled first to Ba Ria-Vung Tau Province in southern Vietnam and when Duy Tan rebelled against the French, they were both exiled to France’s  Reunion Island in 1916.

Thanh Thai never gave up hope for the liberation of his country. In 1945, he was allowed to return home but kept under house arrest in Vung Tau. He passed away in Saigon (Ho Chi Minh City now) in March 1954.

According to the Hue Monuments Conservation Center, the bed is likely to have been built when King Thanh Thai was a crown prince. The king continued to use it during his reign.

Meanwhile, the rickshaw, made from “trac” wood encrusted with conch, was custom-made as a gift from the king to his mother.

The elaborately carved artifacts are highly cherished for their technical, aesthetic, cultural and historical value.

Phan Thanh Hai, director of the Hue Monuments Conservation Center, said that local experts’ estimates showed that the items could fetch roughly US$50,000.

In very few cases, the provincial People’s Committee gave a nod to the spending of $50,000 on cultural and historical treasures.

The Vietnam Embassy in France raised some €10,000 and had two Vietnamese French persons join the auction, which was held in Tours, France on June 13.

Experts confirmed that the two treasures have legal origins.

After being dethroned in 1907, King Thanh Thai sold the two items to Prosper Jourdan, leader of the king’s escorts.

Jourdan’s heirs later decided to put the treasures on auction and expressed their wish that after the auction, they will be displayed in Hue.

The two Vietnamese French persons, assigned by the Vietnam Embassy in France, failed to buy the item, which fetched a total of €124,000, including the organization fee.

The bed auction winner was one of King Thanh Thai’s distant relatives. The item is on its way back to Vietnam.

The fight for the king's treasured rickshaw

Vietnam’s bidders finally won the bid for €45,000. The item fetched €55,800 including organization fees.

In an unexpected twist, Katia Mollet, a curator of the Paris-based Guimet Museum, declared that France had the right to buy the rickshaw for the same price.

According to French laws, state-run organizations in the European country, which owns the items, are entitled to purchase them at the same price as that offered by the auction winners.

The French government will confirm this right for Guimet Museum within the next 15 days.

Therefore, the auctioner has yet to decide whether to sell to Hue or the Guimet Museum.

“We shouldn’t take legal actions against Guimet Museum, which is well known for their excellent conservation of a number of Vietnamese artifacts and has helped promote them through its exhibits. Instead we should persuade them to give up their quest to buy our treasure,” noted Prof. Phan Huy Le, chair of the Vietnam Association of Historical Sciences.

Along with persuading the French museum’s leader, Vietnam should also “campaign” among French cultural agencies and experts on Vietnamese culture.

“I think with proper, reasonable persuasion, the French museum will finally let us buy the rickshaw,” he added.

Vietnamese-French people and local philanthropists are also donating money to support the Vietnam Embassy’s bid to buy the item.

Vietnamese experts lament that a number of the country’s cultural and historical artifacts are also currently owned by people in other countries.

Local experts said they will advise concerned agencies on that policies should be issued to prevent further loss of national cultural treasures.