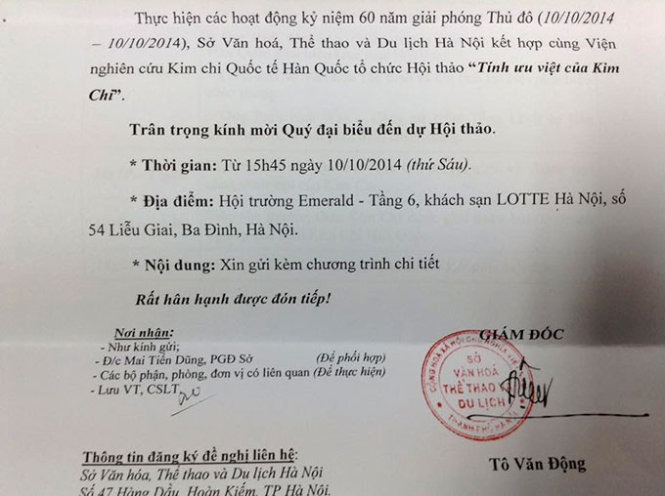 The director of the Hanoi Department of Culture, Sports, and Tourism apologized at a Tuesday meeting for failing to clarify the purpose of a seminar on a Korean delicacy held on the occasion of the capital's 60th liberation anniversary.

To Van Dong, the department’s director, expressed his regret over a recent invitation to a seminar on “kimchi,” which the organizer said would be part of the country’s activities to commemorate Hanoi’s liberation.

“Kimchi” is a famous Korean delicacy made from fermented cabbage and chili.

The seminar will take place at the Hanoi Lotte Hotel in Ba Dinh District on Friday, according to the invitation.

In the invite, the seminar was denoted as an event to celebrate the 60th anniversary of the capital’s liberation from French rule.

Dong acknowledged the blunder in signing the invitation, which failed to point out that the seminar on “kimchi” is part of the city’s annual Traditional Craft Village Festival – one of many activities marking the 60th anniversary.

Many thus criticized the event, saying there is no relevance to the liberation anniversary.

The festival, which boasts over 360 booths representing nearly 200 traditional craft villages, is scheduled to run in Hanoi through Sunday.

At the seminar, Korean representatives will introduce the beauty and production techniques of the dish, as well as the future growth of “kimchi,” while Vietnamese delegates will showcase their culinary delights, including spring rolls and “pho” (noodle soup with beef or chicken), Dong explained.

However, according to the brief description attached to the invite, the introduction of Vietnamese cuisine was not included.

A presentation on the superiority of “kimchi” is to be preceded by an opening speech, and followed by a small party with “kimchi” produced by five Korean companies.

The seminar will wrap up with boxes of “kimchi” handed over to participants as gifts.

The director said that he had signed the revised version of the invitation on Tuesday afternoon.