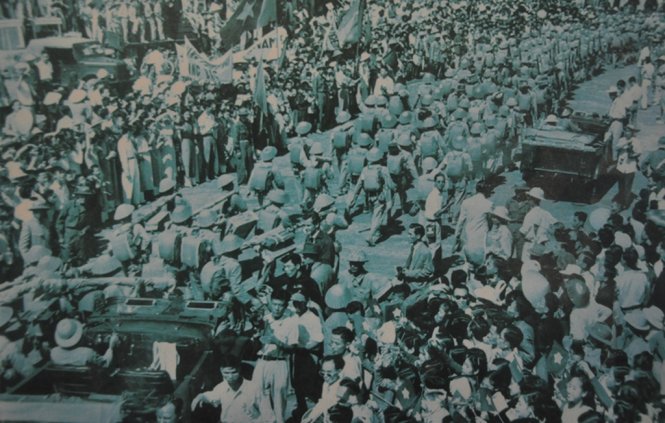 Two exhibits, which are running in Hanoi until Friday and the end of this month to mark the capital’s 60th anniversary of liberation from French rule, showcase the capital’s gorgeous landscapes and historic moments.

The first exhibit, called “Nhung Goc Nhin Ha Noi” (Perspectives of Hanoi), which runs until tomorrow, is jointly organized by the Hanoi Association of Urban Planning and Development and the Old Quarter’s management.

It is taking place at Hoan Kiem (Sword) Lake – one of Hanoi’s icons – and features 60 photos and 12 old maps of the capital city.

The photos offer glimpses of a peaceful city, which is also growing quickly in the modern world, and its cheery, hospitable people.

In a similar vein, the other exhibition – “Ha Noi – Ngay Tiep Quan” (Hanoi – The Takeover Day) – is going on until October 30.

The display is located at Kim Ngan Temple (42 – 44 Hang Bac Street, Hoan Kiem District) and has been organized by the National Library of Vietnam and Xua va Nay (Then and Now) Magazine.

On view are 60 photos which capture the glorious moment on October 10, 1954, when the French troops lowered and folded up their national flag and withdrew from Hanoi, while Vietnamese soldiers proudly advanced on the city’s streets to the cheers and elation of locals.

The photos were taken by local and foreign reporters, as well as local people.

The exhibit also showcases some 500 books and 20 newspapers and magazines which feature chapters and articles by Vietnamese and foreign authors on Hanoi before, during, and after Liberation Day.

The books and magazines are being preserved at the National Library of Vietnam.