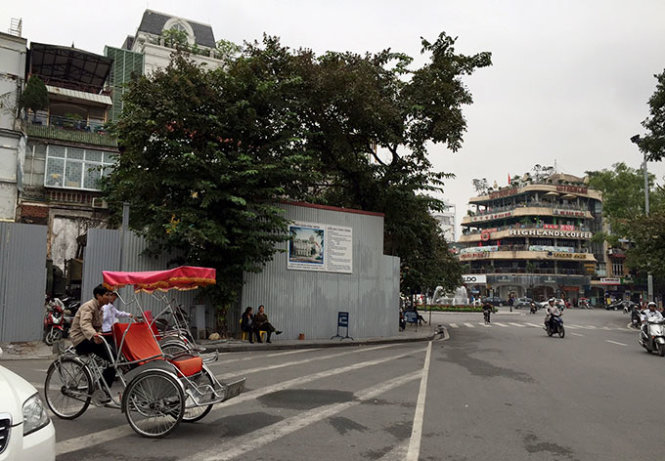 Authorities in Hanoi have resumed constructing an information and culture center, intended to provide tourists with information about the capital’s iconic Guom (Sword) Lake and the old town nearby, after four years of suspension.

The People’s Committee of Hoan Kiem District, where the lake is located, has given the green light to the continuation of the center’s construction at 2 Le Thai To Street.

The construction was suspended shortly after public opinions had it that the building’s planned height would impact Dong Kinh Nghia Thuc Square, which connects Le Thai To Street to some others.

The square, which is of great historical significance, is another of the capital's icons.

According to the current plan, the building will boast three floors, with its height reduced to 13 meters.

As Tuoi Tre (Youth) newspaper reporters observed, the construction site is located at the T-junction of Luong Van Can Street, which is only 50 meters from Guom Lake across Le Thai To Street.

The site also offers a direct view of the lake, an icon known for its picturesque, serene landscape.

However, his committee has decided to shrink its scale and height.

Hung stressed that the 242m² land plot is state-owned. The lot was home to a state office building, but has looked unsightly since the building was torn down.

The vice chair noted that the proposed information center will improve the cityscape and serve as the location where tourists can find out about Guom Lake and Hanoi’s old town in the vicinity.

He confirmed that the project, which is slated for completion by the second quarter of 2015, does not intrude on Dong Kinh Nghia Thuc Square at all.