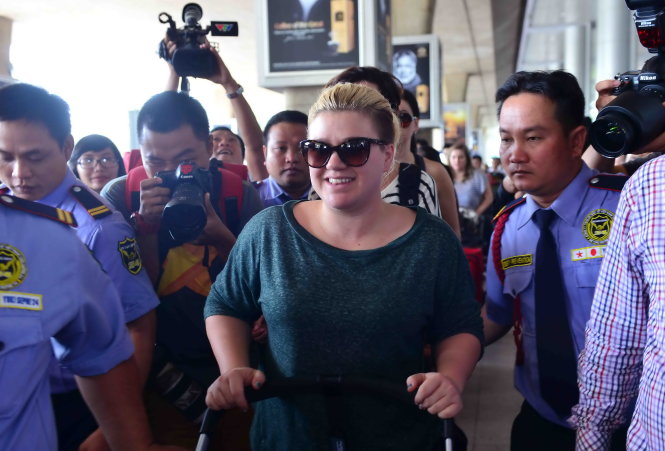 Celebrated American pop star Kelly Clarkson, who won the first season of the much-loved singing reality show “American Idol” in 2002, arrived in Ho Chi Minh City on Monday afternoon to prepare for her performance at the Miss Vietnam 2014 final on Saturday night.

Clarkson landed at Tan Son Nhat International Airport along with her husband, young daughter, and crew.

The singer, in a casual outfit, beamed at local fans and gave ample compliments on the lotus bouquet she was given.

Clarkson and her family rested and went sightseeing in Ho Chi Minh City and joined a press conference at Sofitel Saigon Hotel on Tuesday morning, according to Vo Do Minh Hoang, a representative of Viet Vision Co., which invited her and is taking care of her stay in Vietnam.

The pop star and her crew are set to fly to Phu Quoc Island in the southern province of Kien Giang to rehearse for her performance of three to four songs at the beauty pageant’s finale, which will take place at the newly-opened Vinpearl Phu Quoc Resort.

At the event, which will be broadcast live on Vietnamese national channel VTV1, Clarkson will sing some of the hits that have helped her gain a huge number of fans across the globe.

Born in 1982 in Texas, Kelly Clarkson rose to fame after winning “American Idol” in 2002 with her strong and passionate voice, going on to become one of the most successful winners of the program.

Over the last 12 years she has had a series of international hits, including “Because of You,” “Since You’ve Been Gone,” “My Life Would Suck Without You,” “Stronger,” and more recent songs like “People Like Us” and “Catch My Breath.”

Her music video for “Stronger” became a sensation in Vietnam in 2011 as it featured a group of Vietnamese youngsters dancing to the song, among numerous scenes of people dancing in other countries.

According to the organizers, the Miss Vietnam 2014 finale is intended to put Phu Quoc, dubbed Vietnam’s tourism haven, on the map of local and international pageants.

This year, Miss Vietnam is being jointly organized by Tien Phong (Vanguard) newspaper and the People’s Committee of Kien Giang Province.

Besides upholding the same regulations from previous years, Miss Vietnam 2014 has tightened its rules in terms of contestants’ marital status, as beauties are required to be single.

The contest has also decreased its minimum height requirement to 1.62m from 1.65m, allowing more women to apply in an effort to increase submissions.

Dang Thu Thao, from the southern province of Bac Lieu, was crowned in the 2012 edition.