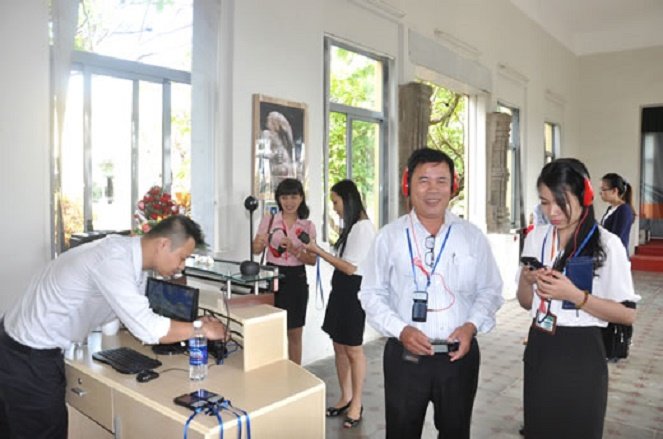 A museum dedicated to the culture of the Cham ethnic minority in central Vietnam has started offering audio guide services in Vietnamese and English to add diversity to and improve its guide work.

The Cham Sculpture Museum, at number 2 2/9 Street in Hai Chau District, Da Nang City, operates the service through a transmission system and headphones, the local Department of Culture, Sports, and Tourism said Tuesday on its website.

The headphones are handed out to visitors at the museum’s reception hall.

The new service allows visitors to select the content which suits their degrees of interest, demands, and tastes.

It is of particular help to tourists who are not part of a group, allowing them to explore the museum and its artifacts without the need for a human guide.

An audio guide, or a piece of equipment that provides a recorded spoken commentary often via a handheld device, supplies visitors with loads of information, which ranges from the museum’s history to the origins and features of the artifacts displayed in its four exhibition halls of My Son, Tra Kieu, Dong Duong, and Thap Mam.

According to its website, the Cham Sculpture Museum was built in 1915 and opened to the public in early 1919.

However, researchers and archeologists had gathered a slew of ancient Cham sculptures excavated throughout the city and provinces in the vicinity around 20 years prior to the museum’s foundation.

A photo taken in the early 20th century shows the artifacts being laid out on a mound in the open air.

The museum is currently home to around 2,000 artifacts on the history and culture of the Champa Kingdom, which existed from the seventh to 15th centuries.

The Cham people have been recognized by the Vietnamese government as one of the country’s 54 ethnic communities.