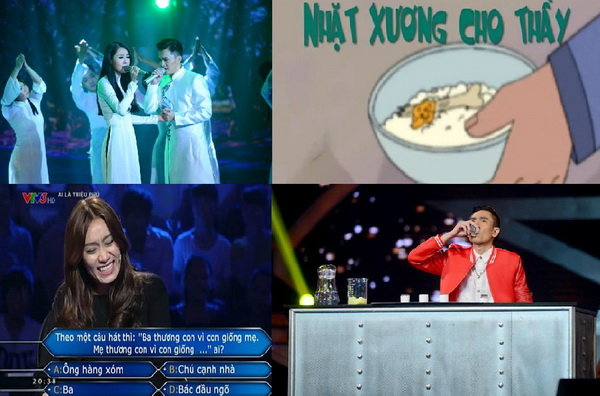 National broadcaster Vietnam Television (VTV) has said sorry for its newest gaffe regarding the verifying process of a reality show featuring a touching love story between a man and a blind woman, after the year 2014 already full of blunders on its channels had just passed.

VTV has also halted the airing of that show and disciplined its director and editor.

The national broadcaster’s blunders happen with such a regular frequency that many suspect they are merely ploys to gain public attention.

The latest slip was made in a reality TV episode which was broadcast on VTV3 – the broadcaster’s entertainment channel – earlier this month.

The episode of “Dieu Uoc thu 7” (Saturday Wishes) airing on January 10 was found being untruthful when it described the life of the two main characters – Nguyen Nhat Thanh and Nguyen Nhu Dao.

Tran Binh Minh, general director of VTV, on Saturday afternoon decided to cease the airing of the program and suspend the show’s director and editor.

At the beginning of the latest episode yesterday, Nguyen Diep Chi, the editor who was in charge of it, personally apologized to Vietnamese viewers and the two characters and their families.

The station also published an apology on its website on Friday evening.

The controversial episode of the program, which features real-life stories and the characters’ sincere wishes, told a deeply moving tale of Dao, who lives in Nghe An Province in north-central Vietnam.

Twenty-three-year-old Dao, who is endowed with a sweet voice but is blind from birth, was featured earning her living by roaming streets in other provinces and singing melodious songs while peddling toothpicks.

She met and fell in love with Thanh, a handsome man who claimed to graduate from the Vietnam National Academy of Music in Hanoi in 2013.

After giving birth to a girl, the couple trusted Ngoc with the caretaking of their daughter, so that they could sing songs and peddle things to make their living.

Ngoc added in mid-July 2014, the crew of the “Dieu Uoc Thu 7” program visited the couple and filmed them at their home.

The two were then invited to Hanoi, where their love story would be recorded for the controversial episode.

After that they returned to Nghe An, Ngoc said, adding that Thanh left his wife and young daughter soon later, and never came back.

The young man later told Dao and her family that he already has a wife and two young children in his hometown, Thanh Hoa Province that borders Nghe An to the north.

A local official confirmed to Tuoi Tre that Thanh and Dao did not register their marriage with the local government and their daughter’s birth certificate only has the mother’s name.

Those from Thanh’s neighborhood also confirmed to a local newspaper that he did not finish elementary school.

He has returned to his official wife since September last year and the woman is expecting their third child.

Representatives from the Vietnam National Academy of Music also confirmed to Tuoi Tre that Thanh had never been one of its students.

One hassle after another

The national broadcaster also admitted it was partly to blame for an incident in the “Vietnam’s Got Talent” semifinal on Sunday last week.

During the show, which aired live on VTV3, contestant Tran Tan Phat performed a risky magic stunt in which he mistakenly drank from a glass of acid and suffered minor burns to the lips and tongue.

The semi night was on air as part of the third Vietnamese season of the “Got Talent” series format that was created by Simon Cowell in the United Kingdom.

Rumor later had it that it was Phat’s mere ploy to draw attention.

VTV also caused public reactions following the episode of “Ai La Trieu Phu” – the Vietnamese version of “Who Wants to Be a Millionaire?” – December 30, 2014.

A contestant was asked in the controversial program to select the right phrase to complete the line “Mother loves me because I take after …” which was extracted from a hugely popular Vietnamese children’s song.

The quiz question was child’s play, but what triggered uproar was the three wrong options which all meant “a male neighbor.”

Many viewers voiced their concerns that the question’s possible implication or joke was inappropriate for children.

Viewers, particularly enthusiasts of old music and “cai luong” (reformed theater), were also frustrated with an episode in the local version of “Just the Two of Us” – a British television singing contest.

The singers acted and sang well in the first part of their performance but their ‘creative renovation,’ a rap message which boasted inappropriate lines suggestive of a materialistic love affair, infuriated a large number of viewers.

The episode, broadcast on VTV1 on November 16, 2014, was wrong in certain details regarding the real age of Cong Phuong – one of the most outstanding under-19 soccer players of Vietnam at the time.

Cong Phuong (wearing jersey number 10), one of Vietnam's most outstanding under-19 soccer players, is seen practicing with his teammates in this file photo. Photo: Tuoi Tre

Also in late November last year, VTV was fined VND30 million ($1,412) for airing a cartoon regarded as offending teachers who are highly respected in Vietnamese society right ahead of Teachers’ Day.

In late October this year, the Chief Inspector of the Ministry of Information and Communications also slapped a VND15 million ($706) penalty on the broadcaster for airing the performance of a boyband in an episode of the Vietnamese season of British reality show “The X Factor.”

In their performance, the four-member band donned the Pieu brocade, a traditional scarf which is a cultural symbol of the Thai ethnic group in the northwestern mountains, in the form of a loincloth.

In late April 2014, VTV publicly apologized for another incident in “The X Factor” show.

Popular singer Anh Thuy was found deceiving viewers in one of the show’s episodes by dressing up as a poor, scar-riddled coffee attendant and making up a pitiable story. In late September, the broadcaster also admitted they made a slip-up in not censoring footage of the beheading of a live turtle, so the disturbing image appeared clearly in the 10th episode of the second season of the “Vua Dau Bep – MasterChef Vietnam” cooking show.