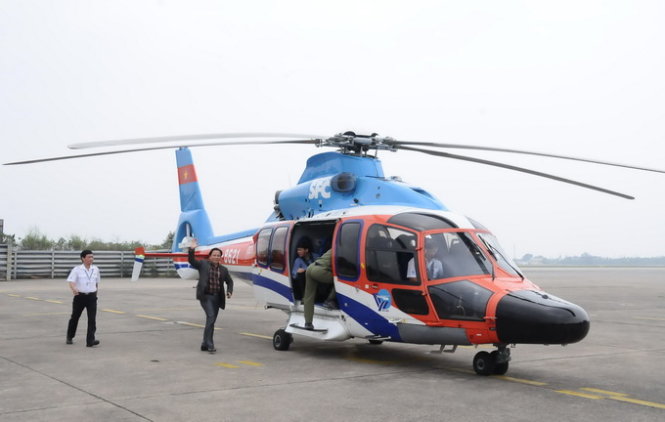 The central city of Da Nang is poised to use French helicopters starting March this year for a new tourism service.

The Vietnam Helicopter Corporation on Tuesday debuted the service in Da Nang City.

The corporation’s central subsidiary, based in Da Nang, are set to kick off several packages including tours around the city, and charter flights to scenic spots in other provinces and on personal demand.

Pham Ngoc Diep, director of the corporation’s central subsidiary, said his company will use the luxury French helicopter line of EC 130 T2 for the packages.

The service will kick off in March.

The 15-minute tour around Da Nang City, which departs from Nuoc Man Airport and goes to Ngu Hanh Son and Linh Ung Pagoda before returning to the departure point, costs VND2.5 million (US$117) apiece.

Meanwhile, it will cost clients VND3.5 million ($163) each for the 25-minute tour, which departs from Nuoc Man Airport and goes around Son Tra Peninsula and Hai Van Pass- one of the country’s most spectacular- before returning to the airport.

Vo Duy Khuong, deputy head of the city’s People’s Committee, said the new service will help diversify the city’s tourism products, but called for fares to be reduced to gain locals and tourists easier access to the service.

In related news, the city has also offered a wide array of activities for Tet, which begins on February 19 this year.

One of the activities is Da Nang Spring Flower Street on Bach Dang Street along the Han River, which is open to the public from Monday to the 6th day of the Lunar New Year, or February 24.

The street is divided into two sections of flowers and lighting which run along the western sidewalks of Rong (Dragon) Bridge, one of the city’s icons.