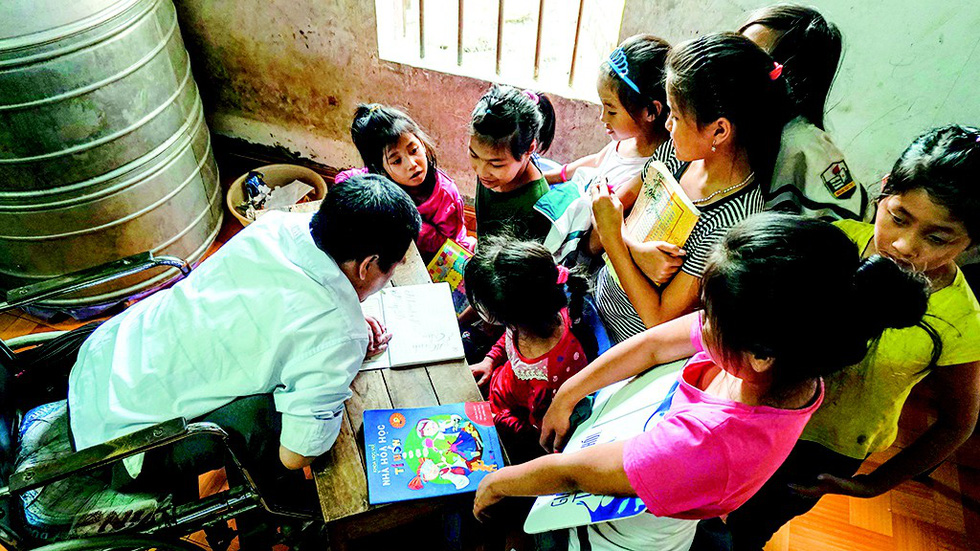 A man with disabilities is popular with residents on the outskirts of Hanoi as he has spent nearly a decade teaching village children in informal classes at his home.

Residents in a village of the capital’s Chuong My District call Phung Van Truong ‘Teacher Truong’ – a title of respect for those giving education at school – although he has no formal teaching qualifications.

But it is surprising to know that he cannot write with his own hands.

As a boy, Truong’s limbs became increasingly feeble, forcing him to hold onto a support whenever he wanted to walk.

The condition was so serious that he never regained the use of his hands and legs for writing.

When he grew up into an adult, he stayed away from the family and ran a shop of his own because he did not want to be a burden on them.

He was determined to learn writing with the mouth as he could not keep a record of the shop’s sales.

The pencil he used often touched his throat, causing him nausea and pain but he was eventually able to master its movement after over a month of practice.

He then offered to tutor local kids in handwriting and basic mathematics at his house.

The number of students increased as children from surrounding villages also came for help.

Truong tailors his instructional method to their abilities and grades to produce greater effectiveness.

“Just because some children are slow in learning doesn’t mean that they fail to learn,” he said.

“If they can’t remember a point that I first teach them, I’ll teach it many times again.”

He and his wife have used part of their house as a library called Hallo World in the hope of giving kids better learning experiences and an important window on the world.