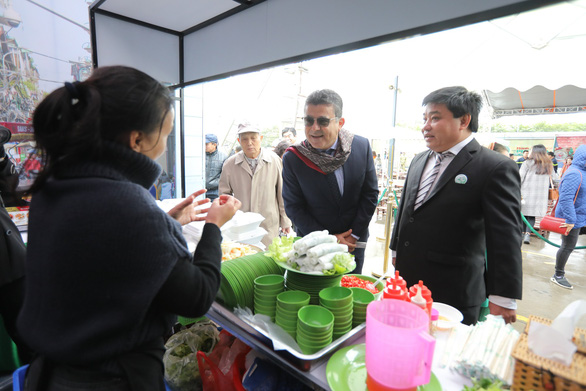 Visitors taste pho in cold, rainy weather at Day of Pho in Hanoi

A number of visitors braved cold weather and light rain to participate in the second ‘Day of Pho’ in Hanoi on Wednesday.

Day of Pho, or Pho Day (December 12), was an event held by Tuoi Tre (Youth) newspaper in celebration of the iconic Vietnamese dish which has won over diners worldwide.

Following the inaugural event in Ho Chi Minh City in 2017, this year’s Pho Day was organized at AEON MALL Long Bien in Hanoi, the widely accepted ‘birthplace’ of pho.

By 9:00 am, popular pho stores and brands in the Vietnamese city, including Thin Bo Ho, Vuong, Hung Ben, and Hai Thien had already had their booths at the event ready, with all ingredients, from slices of beef and noodles to the vegetables pho is served with and the herbs needed to prepare its unique broth.

Located just opposite these booths were those displaying pho spices and herbs and a special area showcasing the process of making a bowl of pho.

Visitors were captivated by not only the colorful scene created by the white noodles, red beef, and green vegetables, but also the pleasant scents of star anise and cinnamon -- the key spices to make a delectable broth of pho.

Palestinian Ambassador to Vietnam Saadi Salama was among the first visitors to the Pho Day on Wednesday morning.

Salama eagerly shared with Tuoi Tre his personal experience with pho as a Palestinian student in Vietnam back in the 1980s.

The ambassador said at that time he found it hard to adapt to Vietnamese cuisine as he was not into the smell of fish sauce.

The other day a Vietnamese friend took Salama to a pho store in the Hanoi Old Quarter, and it was then when he realized how good pho is.

The Palestinian diplomat said he was ‘addicted’ to pho right from that first dish he ever had, adding that he now eats pho at least once a week.

“I once had to wait for 20 minutes at a Vietnamese pho restaurant in England,” he told Tuoi Tre.

“Vietnamese pho is a great dish in other countries.”

Salama underlined that pho is the “passport of Vietnamese cuisine” as it helps introduce the country to the world.

“Foreign visitors to Vietnam will definitely try pho; and once doing so, they will have a great memory to tell their friends and family when they return home.”

Many pho restaurants have taken advantage of the Day of Pho to showcase special variations of the dish.

Hoang Thi Minh Hieu, a visitor from Ho Chi Minh City, tried the special pho rolls, a Hanoi delicacy, at the Hung Ben store at the event and was totally in love with the dish.

Pho rolls are made by filling thick sheets of rice noodle with beef, herbs and vegetables that are normally used in the ordinary soup-based pho. The rice noodle sheets will then be rolled up and piled on a plate and are served with a small dish of fish sauce for dipping.

Miss Vietnam World 2010 Diem Huong tried the pho rolls at Hung Ben before visiting the nearby booth by Hai Thien, an eatery known for its unique colorful pho rolls.

“The colorful pho rolls are not only eye-catching but they also taste good,” Diem Huong said.

The beauty queen said she always misses her father whenever she eats pho.

“When I was young, my father would take me to eat pho and I always felt like I was going to a big party with him,” she recalled.

“I felt like I was a princess whenever I went to eat pho with dad.”

Diem Huong said her father would use those times eating pho with his daughter to teach her about life.

“So whenever life gets tough, I will go eat pho, just to have the feeling that dad is by my side again,” she said emotionally.

A day to love pho

In his opening remarks at the second Day of Pho in Hanoi, Tuoi Tre editor-in-chief Le The Chu said the event was meant to allow visitors to experience a wide variety of pho, and spend a day “loving pho and sharing the value of this dish with international friends.”

Speaking of the origin of the Day of Pho, Chu said the Vietnamese “have our Japanese friends to thank.”

“Pho is the national dish of Vietnam, but the Japanese have beaten us to honor it by dedicating April 4 of each year to the Day of Pho in Japan since 2017,” he explained.

“After that, Tuoi Tre has decided to observe our own Day of Pho on December 12 each year to honor this very special dish.”

He expressed his delight that the Pho Day this year was held in Hanoi, the birthplace of the specialty.

“I hope all the famous pho shops present here today will bring visitors not only good bowls of pho to warm you up with in this cold weather of Hanoi, but also a more profound experience with the Vietnamese pho,” he said.