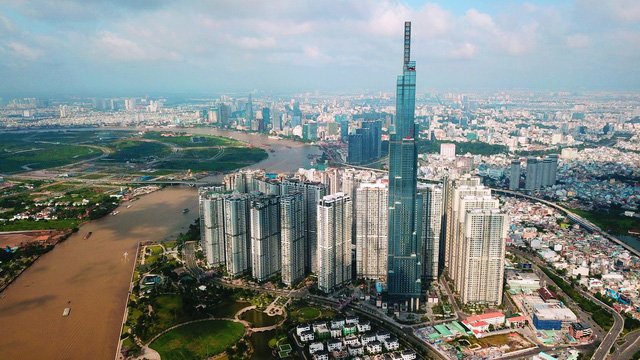 The administration of Ho Chi Minh City has announced Lunar New Year (Tet) fireworks shows will be staged over Landmark 81, the tallest building in Vietnam, and seven other locations in the southern metropolis to ring in the Year of the Pig.

At 461.2 meters high, the Landmark 81, located at the heart of a luxury residential complex developed by Vietnamese conglomerate Vingroup in Binh Thanh District, Ho Chi Minh City, is the 14th tallest building in the world, according to The Skyscrapper Center.

The skyscraper will be one of the only two locations in the southern metropolis where high-altitude fireworks will be on display when the clock strikes midnight on Lunar New Year's Day (February 5).

This is the first time a Tet pyrotechnic show is being organized over the Landmark 81, which was inaugurated in July 2018.

The other location in Ho Chi Minh City that will have high-altitude fireworks is the end of the Saigon River Tunnel in District 2.

Low-altitude fireworks will also be staged at six other locations in the southern metropolis, including the Dam Sen Theme Park in District 11, the National History and Culture Park in District 9, the Ben Duoc Memorial in Cu Chi District, the administrative center of Can Gio District, the Hiep Phuoc Industrial Park in Nha Be District, and the military command of Binh Chanh District.

Musical and art performances will be organized at each of these locations on Lunar New Year’s Eve, the municipal administration said in a statement on Monday.

Tet is the biggest public holiday in Vietnam when locals observe the coming of a new year in the lunar calendar, typically around late January or early February.

In 2019, the Lunar New Year will fall on February 5, with celebratory preparations starting at least a month prior and the pig being the incoming year’s zodiac animal, replacing the dog.

Though the country has since 1995 banned the sale and use of fireworks and other explosive pyrotechnic devices among the public over safety concerns, many local governments including Ho Chi Minh City continue to put up annual fireworks shows to entertain citizens, as permitted by law.