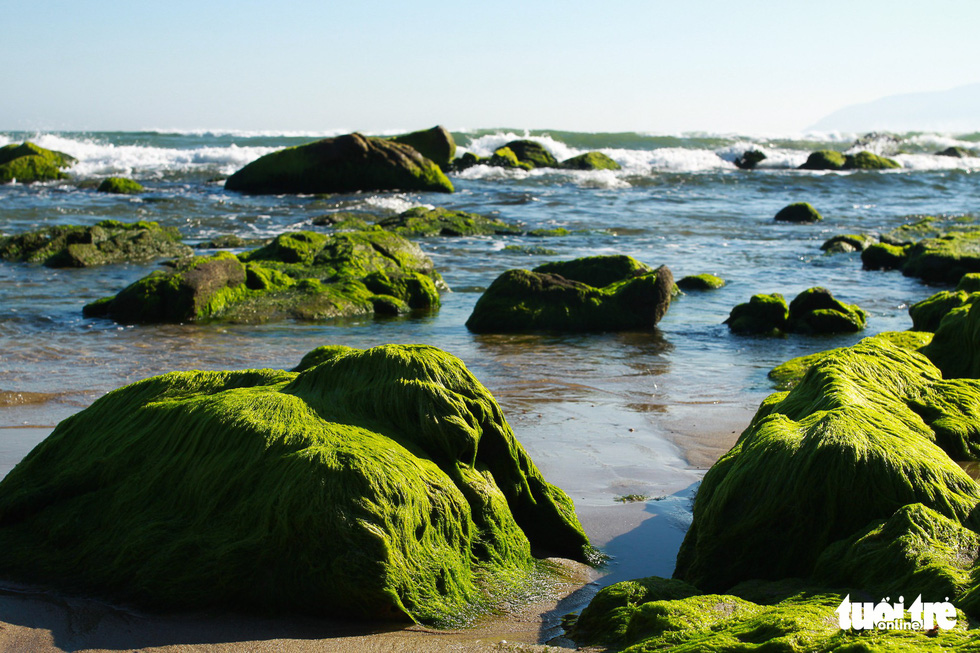 While moss can make anything they cover look old or dirty, local youngsters find a set of moss-covered rocks in a seashore area in the central Vietnamese city of Da Nang a great background for their Instagram photos.

The rocks, located at the Nam O beach in the city’s Lien Chieu District, have emerged as a new ‘check-in point’ for locals and tourists alike, as they already began to be coated with moss after the Tet (Lunar New Year) holiday came to an end last weekend.

The green rocks now make the seashore area look like a fresh meadow emerging from the beach.

The moss-covered rocks are not slippery as one may think, but they are soft to touch.

The best time to admire the scene is early in the morning when the tide is low, and the rocks can be seen above the water.

And when the sun rises, the water drops on the moss will reflect the sunlight to create an illuminating effect for photos taken at the scene.

Taking photos amid the moss-covered rocks at the Nam O beach has become a trend among young people over the last few years.

“The landscape still has its pristine beauty of unspoiled nature and the beautiful rocks look even more impressive with the moss covering them,” Lam Thuy Diem, a college student who learned of this photogenic scenery through her classmates, said.

While the area is already packed with people taking photos with the moss-covered rocks, Tran Thi Thanh Tien, a local resident, said it is not the most beautiful time to visit the area yet.

“In just a few weeks the whole beach will be covered in green,” she said, referring to the phenomenon that not all rocks in the area are now moss-coated.

As a local, Tien expressed her hope that the place would become a well-known tourist destination and benefit the residents there.

Good news is Nam O has enjoyed increasing numbers of visitors over the years, according to Dang Thu, 76, who has been selling beverages at the beach for 13 years.

“In the ‘moss season’ after Tet, I often make a decent income as more and more visitors come here to admire the ‘green rocks’,” she said.