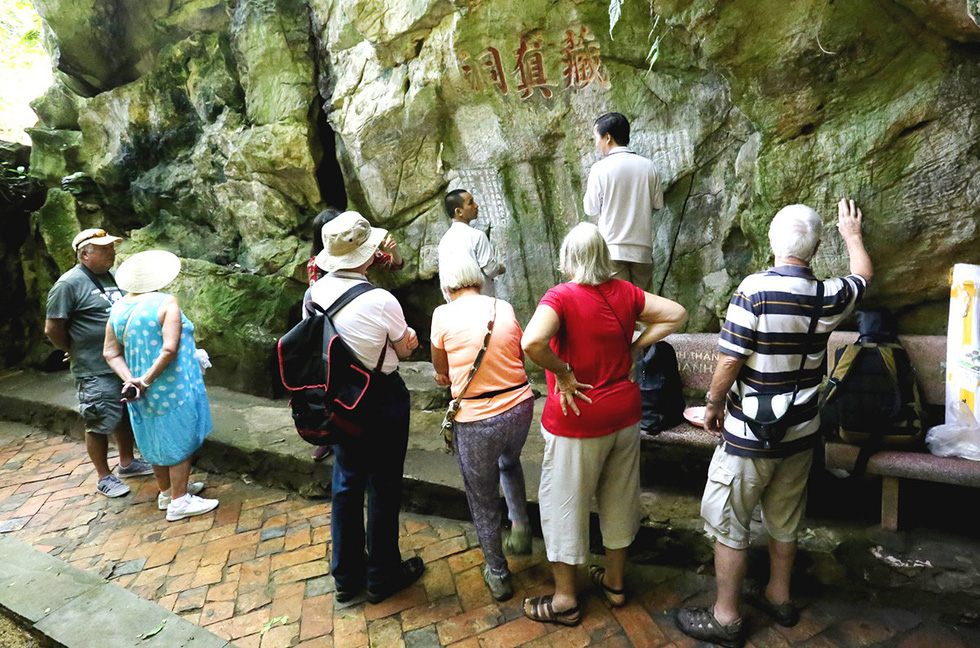 Vietnamese researchers have finished studying a series of 90 ancient texts and documents carved into the walls of caves at the Ngu Hanh Son (Marble) Mountains in Da Nang in an unprecedented effort to systemize these archives.

For some time now, visitors to the site have been enthralled by dozens of carvings in Chinese that appear on cave walls within the mountains. Interestingly enough, there are also engravings in French and Vietnamese.

A recently concluded research by Lieu Quan, a Buddhist cultural center in Da Nang’s neighbor Hue City, found that there are as many as 90 engravings at the Ngu Hanh Son Mountains, scattered across all five major cave systems of ithe hills.

‘Ma nhai,' a Vietnamese word for mountain engravings, are predominantly observed in northern and north-central Vietnam, making the discovery of these carvings in Da Nang the first on record in central and southern provinces, said the Venerable Thich Khong Nhien, who headed the study.

Most of the discovered carvings had been broken down by weather, while others were found covered up by humans using a mixture of paint and cement.

The research team spent sixth months in late 2018 and early 2019 shaving off this coating to reveal the texts hidden beneath.

“A precious archive of hidden texts has been successfully uncovered,” Nhien said.

The system of ‘ma nhai’ at Ngu Hanh Son is the largest ever found at a single site in Vietnam in terms of both number and categorical diversity.

Among the 90 texts studied by researchers are poems, distiches, folk song lyrics, and historical accounts dating from the early 17th century to the late 20th century.

They can be categorized into three main groups: Buddhist engravings during the Nguyen-dynasty era, imperial writings by Emperor Minh Mang, and other texts during the 1885-1945 period.

The sophistication of these carvings reflects the refined workmanship of Vietnamese stone carvers, researchers point out.

They are significant to the studying of Vietnam’s history, literature, calligraphy, and sculpture, and reflect the thoughts of the Vietnamese people of their age.

Conservation and restoration of these artifacts are urgent so the importance of this invaluable heritage would be appreciated by locals and tourists alike, Nhien said.

A conference to announce findings of the study was also held in Da Nang on Monday, said Le Ngoc Nhat, vice-director of the Ngu Hanh Son Relics Management Authority.

“We will put together a formal application for the system of engravings at the Ngu Hanh Son Mountains to be inscribed into the UNESCO Memory of the World list of global documentary heritage sites,” Nhat said.