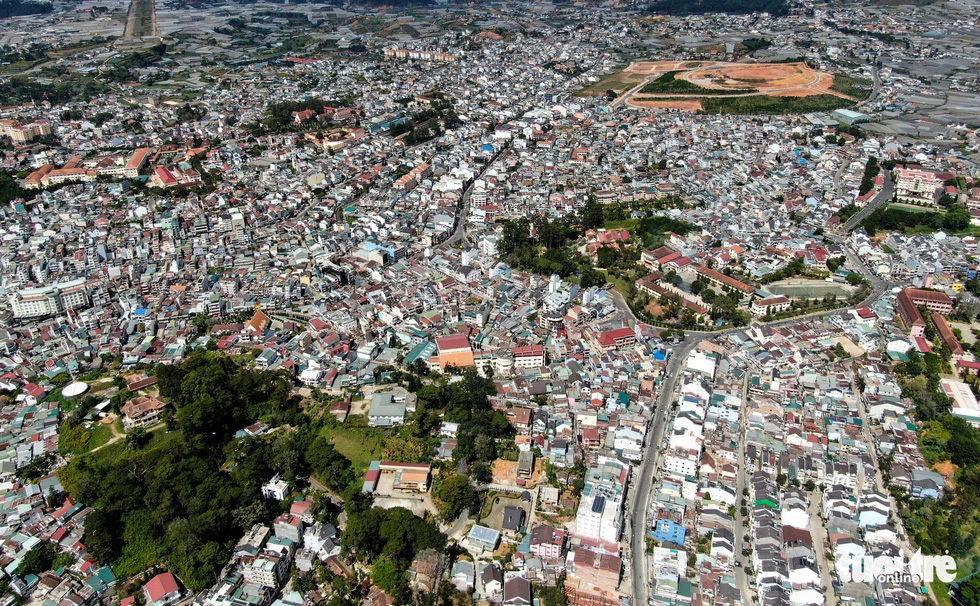 How Da Lat, once dubbed ‘city in the woods’, currently looks

Da Lat, a touristic city in Vietnam’s Central Highlands, is now surrounded by concrete, with buildings taking away the extensive greenery that once earned the place the description of ‘a city in the woods and the woods within a city.’

The capital of Lam Dong Province, Da Lat is one of the most well-known tourist destinations for both foreign and domestic visitors thanks to its beautiful greenery with many forests and green-covered hills and mountains.

But along with the influx of visitors, a number of people from other localities have also flocked to Da Lat to seek business opportunities from the city’s booming tourism.

Photos taken from a bird-eye’s view of Da Lat by Tuoi Tre (Youth) newspaper show a city that looks distinctly different from what it used to be.

Da Lat now presents itself as a concrete jungle, with little green space seen within a diameter of four kilometers from the city center, where the iconic Xuan Huong Lake is located.

One of the few green spaces that are clearly visible in the photos, taken from a height of about 300m, is ironically the Cu Hill, a privately-owned golf course.

The other green spaces of Da Lat, including Prenn Mountain Pass and Ta Nung Mountain Pass, are located just too far from the downtown area.

According to the Ministry of Agriculture and Rural Development, Da Lat’s forest coverage ratio has dropped to 49 percent, compared to a target coverage of 51 percent.

While people in Ho Chi Minh City and other southern localities tend to flock to Da Lat during the sunny season to avoid the hot weather, temperatures in the Central Highlands city nowadays could be as high as 30 degrees Celsius.

Da Lat has lost the year-round cool weather that once made it a favorite destination for people in tropical Vietnam.

Tourists to Da Lat today only experience a dry and hot climate due to the lack of plants, while city traffic has increasingly worsened.

Here are some photos of a jungle city-like Da Lat taken by Tuoi Tre in March 2019.

Tourist town of Sapa in need of proper development planning