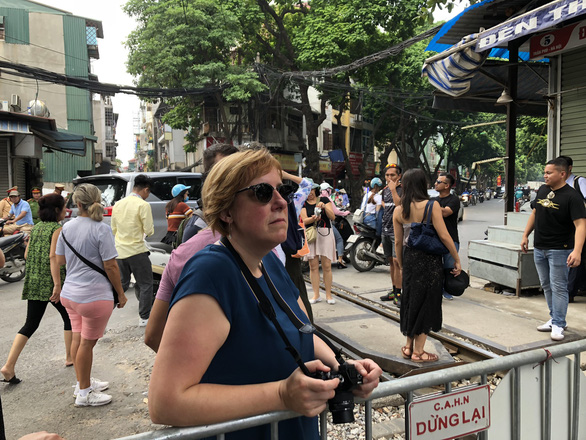 Tourists who arrived at the site of Hanoi’s famous trackside cafés were turned away on Thursday after police officers barricaded access to the area, closing the book on a once popular photo spot now deemed unsafe by local authorities.

The Hanoi administration earlier this week launched an all-out campaign to clear cafés which violate a safety corridor along a railroad that snakes through crowded neighborhoods in the Vietnamese capital.

The move came after Hanoi received a request from the Ministry of Transport asking it to end railway safety violations by coffee shops along the tracks which attracted a healthy crowd of daily visitors who seek the thrill of enjoying coffee just inches from an active railway.

Those who did not come for the coffee came to snap photos of the stunning, Instagrammable backdrop of a train winding through a narrow corridor lined with urban houses and coffee-sipping tourists.

On Thursday morning, all that hustle and bustle ground to a halt as visitors to the popular cafés were stopped by fences and officers who told them to turn back as the tracks are now off-limits to tourists.

While silence fell on the coffee shops along the tracks, most of which were completely devoid of customers, a more boisterous scene took place just outside the barriers as English-speaking officers explained to foreign tourists why they were not allowed near the tracks.

Meanwhile, reporters were busy snapping photos of the commotion.

Owners of the railway cafés are reasonably upset by the shutdown.

“My family has lived here for over a decade,” said Ha, who runs a trackside coffee shop.

Ha said the place had only got more popular with tourists to Hanoi in recent months thanks to good reviews on social media.

“Tourists are upset by the ban,” she said.

“We hope the city’s administration has long-term plans to develop tourism around the rail tracks that meets safety standards.”

“This is really a danger for social security, order, and safety,” said Deputy Minister of Transport Nguyen Ngoc Dong.

The ministry also sought to prohibit gathering and photography on or near the tracks.

On Sunday, a train which was leaving the Hanoi train station was forced to make an emergency stop to avoid plowing into tourists who failed to clear the tracks, state TV reported.