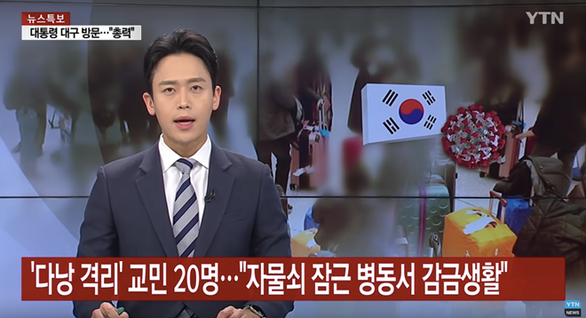 A South Korean news channel has issued a statement regarding a recent report on the treatment of its nationals placed under quarantine in Vietnam, as the Southeast Asian country struggles to maintain its grip on the novel coronavirus disease (COVID-19).

The Korean Cultural Center in Vietnam on Wednesday said YTN – a 24-hour tabloid news channel broadcast throughout South Korea – had made an official announcement on Monday regarding the report.

The announcement recounted a YTN news report broadcast on February 25 and 26 which shared the opinions of some South Korean tourists who had been sent home after a brief stay in a quarantine camp in the central Vietnamese city of Da Nang.

The interviewees were among a group of 20 South Korean visitors who, together with two Thai tourists and 58 Vietnamese, arrived in Da Nang on a flight from Daegu – South Korea’s COVID-19 epicenter – on February 24.

Pursuant to the quarantine guidelines issued by the Vietnamese Ministry of Health for all people arriving from disease-hit areas, including Daegu, the South Koreans were told they would need to be isolated for monitoring.

As the South Koreans refused to follow the local authorities’ quarantine request, the group was temporarily kept at the Da Nang Lung Disease Hospital before boarding a Vietnamese government-sponsored charter flight back to their home country.

Included in YTN’s report was the South Korean visitors’ distaste for the meals served to them at the hospital in Da Nang, which included what appeared to be rice, kimchi and ‘banh mi’ (Vietnamese stuffed baguette).

The South Korean nationals interviewed for YTN’s report stated that their meal comprised only “some pieces of bread,” according Thanh Nien (Young People), a Vietnamese-language online newspaper.

The South Koreans also complained that the quarantine conditions in Vietnam were so bad that they “could not even wash.”

Immediately after it was aired, the YTN report stirred a wave of outrage amongst Vietnamese social media users who criticized the South Korean channel for its one-sided reporting.

Many also argued that Da Nang authorities treated the South Koreans with elaborate courtesy as banh mi is a celebrated Vietnamese food known around the world while the kimchi was a thoughtful touch, particularly as it would never have been made available in a regular Vietnamese meal.

Vietnamese netizens said that the South Korean visitors, instead of complaining, should have thanked Vietnam for its proactive measures to prevent and combat the COVID-19 outbreak.

Anger over the report seemed to spread further than just the borders of Vietnam, with #20KoreansStopLying and #AplogizeToVietNam taking over the Twitterverse and topping real-time trends on the social media network.

YTN issued an official statement regarding the controversy on Monday, explaining that the channel had been consistently providing reports on the South Korean citizens quarantined in Vietnam during that time.

The network excused the report as part of its obligation of “conveying all relevant interview content without adding or censoring details.”

The channel also said it regretted that some of the complaints and expressions in the interview were broadcast without filtering.

"We only intend to convey the stance of isolated individuals at the Vietnamese hospital, but not to downplay or disregard the typical culture of Vietnam [sic]," YTN said.

The news broadcaster added that it has learned from the experience and will attempt to be more cognizant of cultural differences in its reporting.

COVID-19, which first surfaced in the central Chinese city of Wuhan in December 2019, has infected nearly 95,400 people and killed 3,285 globally as of 9:00 am on Thursday, according to the Vietnamese Ministry of Health.

South Korea has reported 35 deaths out of its 5,766 COVID-19 cases, according to the same source.