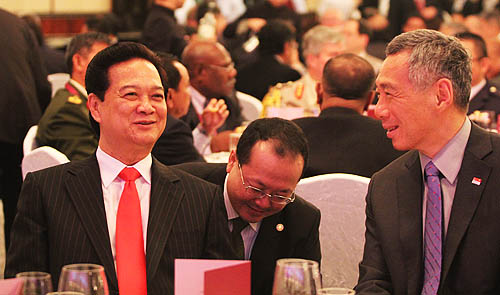 Vietnam and Singapore agreed to further promote cooperation at regional and international forums for the interests of each country as well as for peace, stability, cooperation and development in the region and the world.

The agreement was made on May 31 between Prime Minister Nguyen Tan Dung, who is in Singapore for the 12th Shangri La Dialogue, and the host country’s President Tony Tan Keng Yam and its Prime Minister Lee Hsien Loong.

The Singaporean President said he highly valued Vietnam’s role in the region and wished that the Vietnamese people will gain greater achievements in their national construction and development.

The two leaders expressed their pleasure at the growing friendship and all-around cooperation between Vietnam and Singapore over the past years, especially when the two countries are celebrating the 40th anniversary of their diplomatic ties (1973-2013) and looking towards the establishment of a strategic partnership.

At the meeting with PM Lee Hsien Loong, PM Dung thanked Loong and the organizers of the 12th Shangri La Dialogue for inviting him to deliver a keynote address at the important event.

Dung highly valued the significance of the dialogue, considering it as a chance for Vietnam to present its views on regional and international security issues to the world community. The two PMs said they are pleased with the fruitful outcomes of the comprehensive cooperation Vietnam and Singapore during the past years.

The two-way trade between the two countries has increased year on year, hitting US$9.6 billion in 2012 and Singaporean investors now have 1,173 projects worth US$27 billion in Vietnam.

The two sides agreed that they will strengthen cooperation in the fields of defense, security, construction, education, culture and tourism, and continue working closely in the negotiation process for a Trans-Pacific Partnership (TPP) Agreement.

Besides, the two PMs agreed that ASEAN should exert more efforts to maintain internal solidarity, while nurturing a high political will to successfully build an ASEAN Community by 2015 and promote its central role.

Concerning the East Sea issue, both the Singaporean Prime Minister and President shared the same view with PM Dung that all relevant parties should act with restraint and settle all disputes peacefully in accordance with international law and the 1982 United Nations Convention on the Law of the Sea (1982 UNCLOS), the Declaration on Conduct of Parties in the East Sea (DOC) and ASEAN’s Six-Point Principles on the East Sea issue, looking towards the early formation of a Code of Conduct in the East Sea (COC).

After their meeting, the Singaporean PM and his Vietnamese counterpart witnessed the granting of a supplementary license of the Dung Quat Thermal Power Plant project in Vietnam’s central Quang Ngai province to Singapore’s Sembcorp Group.