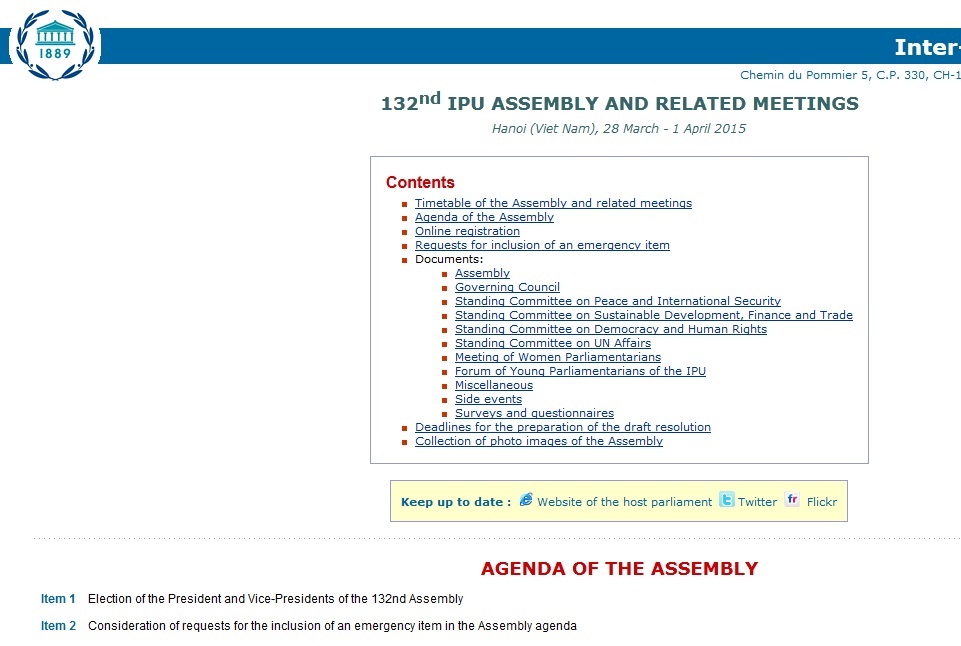 >> Vietnam consults on human rights, democracy issues ahead of IPU-132

The visiting IPU leader expressed the appreciation when he was greeted by Vietnam’s Prime Minister Nguyen Tan Dung in Hanoi on Wednesday, three days before the event starts, covering issues of global concern, such as international law, cyber security, and water resources. President Chowdhury also remarked that the IPU-132, where a Hanoi Declaration will be adopted, will contribute to the United Nations’ policymaking and post-2015 sustainable development goals. He expressed his strong belief that the upcoming IPU-132 will be a success, reaching crucial consensus for the common development of the IPU and international community at large. The IPU leader told his host that Vietnam is an exemplary model in terms of poverty reduction, disaster mitigation, sustainable development, and climate change response. In reply, PM Dung assured his guest that Vietnam will do its utmost to prepare for and make the IPU-132 a success. He said the Southeast Asian country highly values the role of IPU, an international organization that operates for the sake of peace, security, friendship, cooperation, development, freedom, democracy, human rights, gender equality, progress and social justice –  all of which match the development orientations of the Southeast Asian country.

Vietnam also appreciates the IPU-132’s theme “Sustainable Development Goals: Turning Words into Action,” as it is in line with the IPU strategy for 2012-2017, the Vietnamese leader added. The IPU, which was established in 1889, now has 163 members and 10 associate members. Vietnam joined the union in 1979.