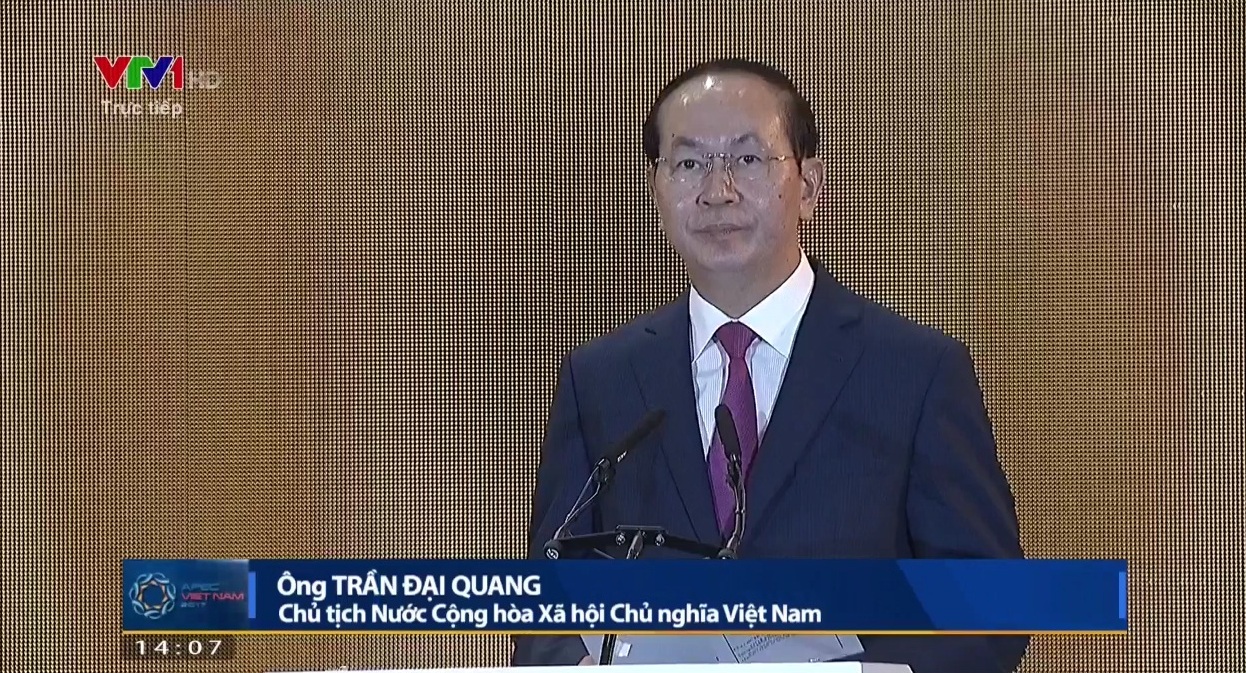 Vietnamese State President Tran Dai Quang delivered a keynote speech at the opening of the APEC CEO Summit 2017 in central Da Nang City on Wednesday afternoon, in which he stressed the forum’s role as a driver of global growth and integration.

Over 2,000 international business leaders and 800 Vietnamese entrepreneurs attended the summit along with delegates from APEC economies.

The Asia-Pacific Economic Cooperation (APEC) is a forum of 21 Pacific Rim member economies that promotes free trade throughout the Asia-Pacific region.

The 2017 APEC Economic Leaders’ Week, running from November 6 to 11 in Da Nang, is the culmination of Vietnam’s year-long hosting of APEC meetings.

The president remarked upon APEC’s role as witness to the turning-point changes of the world over its nearly 30 years of existence, as well as an integral part of those changes.

“[APEC] has become the most effective economic cooperation mechanism in promoting the role of businesses and transforming the Asia-Pacific region into a driver of global growth and integration as well as the incubator of new ideas for the future,” President Quang asserted.

These achievements were not possible without crucial contributions from the Asia-Pacific business community that the APEC economies represent, he added.

The Vietnamese head of state stressed how his country has worked with other member economies to develop and implement “a wide range of meaningful cooperation programs and activities for the people and businesses” on such issues as human resource development in the digital age, the development of Micro, Small and Medium Enterprises (MSMEs), cross-border e-commerce facilitation, the promotion of an Internet and digital economy, and financial, economic and social inclusion

“Our overarching goal is to promote development that is centered around the people and businesses,” President Quang said.

For APEC to remain the champion of regional economic integration, he said, the Asia-Pacific business community needs to continue playing an important role in helping governments address some key issues, which include further generating the momentum of global economic integration and recovery, upholding its leading role in trade and investment liberalization, and fulfilling the Bogor Goals by 2020.

In 1994, APEC members convening in the Indonesian city of Bogor set the goal of free and open trade and investment in the Asia-Pacific region, better known as the Bogor Goals, which have since remained the inspirational strength behind the grouping's agenda.

The Bogor Goals set 2010 for developed members and 2020 for developing ones, including Vietnam, to achieve free trade and investment.

President Quang also highlighted the need for APEC to bolster efforts to ensure the inclusiveness of growth.

“We need to turn ‘economic miracles’ into ‘inclusive development miracles’ in our region and APEC should continue to play a leading role in the implementation of the United Nations’ Sustainable Development Goals,” he said.

Directing attention to the theme of APEC Vietnam 2017, which is ‘Creating New Dynamism, Fostering a Shared Future,’ President Quang called for those present at the conference hall as well as millions of other businesses in the region to “make active contributions to the development and realization of the post-2020 APEC Vision of building a peaceful, stable, dynamic, integrated and prosperous Asia-Pacific region.”

The president concluded his keynote speech by reminding the audience that, as a business community with a high level of adaptability, the APEC businesses would “certainly continue to prosper amidst this time of strong volatility.”

“We hope that you will continue working with us to generate new momentum for regional growth and integration, so that the future of the world in the 21st century would truly begin in the Asia-Pacific,” he said.