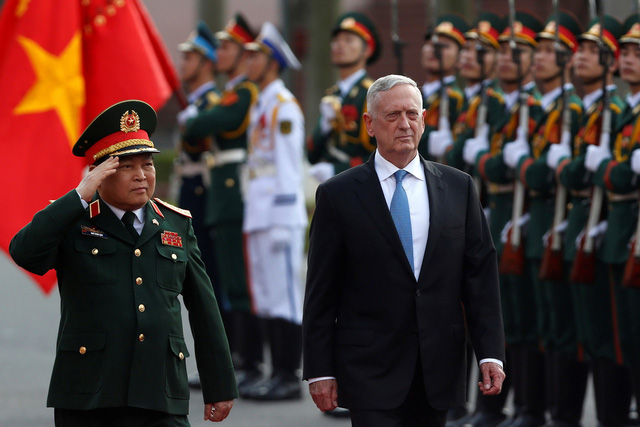 ​US aircraft carrier to visit Vietnam in March

A United States aircraft carrier is expected to pay a visit to central Vietnam in March, the two countries’ defense ministers have said.

An official ceremony was organized to welcome U.S. Secretary of Defense James Mattis to the headquarters of the Ministry of National Defense in Hanoi on Thursday evening, as part of his visit to Vietnam on January 24 and 25.

This is Mattis’s first visit to Vietnam since assuming his current position and the sixth time a U.S. Secretary of Defense has visited the Southeast Asian nation since two countries normalized relations in 1995.

The officials reviewed cooperative defense initiatives between Vietnam and the U.S. over the past few years and agreed on measures to further promote bilateral military ties in the future, based on a memorandum of understanding on defense cooperation signed in 2011, a Joint Vision Statement on defense ties signed in 2015, an action plan for 2018-2020, and agreements reached by their senior leaders.

Both Secretary Mattis and Minister Lich agreed that current bilateral defense collaboration has been producing positive outcomes, especially in regard to the search for missing U.S. servicemen, AO/dioxin decontamination, bomb and mine clearance, rescue and humanitarian aid, and United Nations peacekeeping operations, thus contributing to the enhancement of the two countries’ comprehensive partnership.

Several regional and international issues of mutual concern were also discussed in the meeting.

Secretary Mattis and Minister Lich have both asked their country leaders to approve the visit of a U.S. aircraft carrier to the central city of Da Nang in March.

The Pentagon chief also met with General Secretary of the Communist Party of Vietnam Nguyen Phu Trong and State President Tran Dai Quang before concluding his trip later that day.