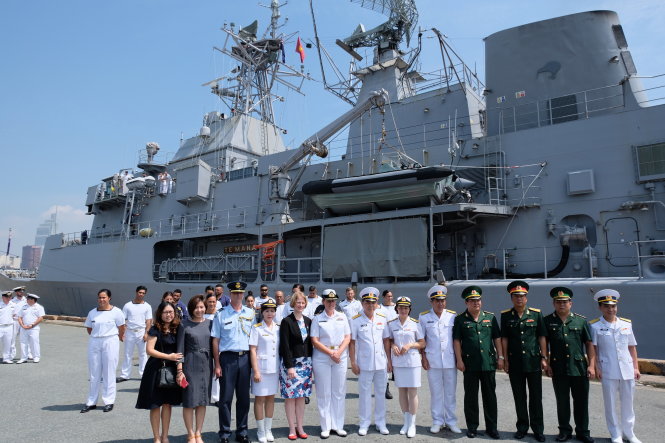 A frigate of the Royal New Zealand Navy arrived in Ho Chi Minh City on Tuesday, commencing its five-day visit to Vietnam.

Frigate HMNZS Te Mana F77 carrying 178 officers and crew members was anchored at Saigon Port to start their trip from September 25 to 29.

This is the first visit to the southern metropolis by New Zealand’s naval force this year, marking the 43rd anniversary of diplomatic ties between Vietnam and the Oceanic nation.

Lieutenant Colonel Lisa Hunn, commanding officer of the Te Mana, said the visit is aimed at enhancing the defense cooperation between the two countries, thus contributing to the partnership between their navies and militaries in general.

As part of the effort, the frigate Te Kaha previously visited the central Vietnamese city of Da Nang last year, she added.

During their stay, the New Zealand officers and crew members are scheduled to pay tribute to late President Ho Chi Minh at his statue in one of the city’s parks and pay courtesy calls to officials of the municipal People’s Committee and the Military Zone 7 High Command.

They will also engage in a friendly volleyball match with their colleagues of Naval Zone 2, provide equipment and help repair local schools, and visit several landmarks around the city.

The vessel’s main missions include maritime security patrols and communication at sea.