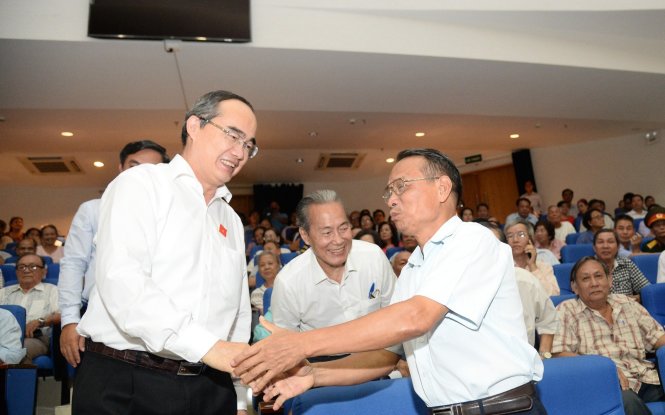 Vietnamese Party chief and State President Nguyen Phu Trong is expected to make an appearance at an early date after taking some time off work due to health issues, Secretary of the Ho Chi Minh City Party Committee Nguyen Thien Nhan told voters on Tuesday.

“The General Secretary’s health is improving,” Nhan told the audience of a voters’ meeting in District 3, Ho Chi Minh City on Tuesday, referring to President Trong’s official title in the Communist Party of Vietnam.

“When it comes to health, each of us has a different recovery rate so it’s impossible to give a specific date, but I believe voters will soon see the General Secretary make an appearance and be back to work,” Nhan said.

Nhan was answering a question raised by one of his constituents Le Thanh Tung, who asked for updates on the condition of President Trong.

Last month, foreign ministry spokesperson Le Thi Thu Hang told reporters “a heavy workload and extreme weather” had affected the health of the Vietnamese head of state, addressing rumor that he had health issues after a working trip to the Mekong Delta province of Kien Giang in mid-April.

President Trong was in Kien Giang on April 13-14 to discuss the implementation of socio-economic, security, and national defense initiatives with local officials.

“He will return to normal work soon,” Hang said.

On April 27, the Vietnam News Agency reported that President Trong would lead the funeral organizing committee for the national mourning of late President Le Duc Anh on May 3-4.

“However, [President Trong] was not seen at the state funeral of late General Le Duc Anh despite being the head of its organizing committee,” Tung said at the voters’ meeting on Tuesday.

“We demand that the condition of comrade Nguyen Phu Trong be made clear,” he added.

“It’s not a good idea to leave Internet users to speculate [about the President’s health], and we can’t prohibit them from speaking their minds either,” the voter stressed.

He is also General Secretary of the Communist Party of Vietnam, a position he has held since 2011.