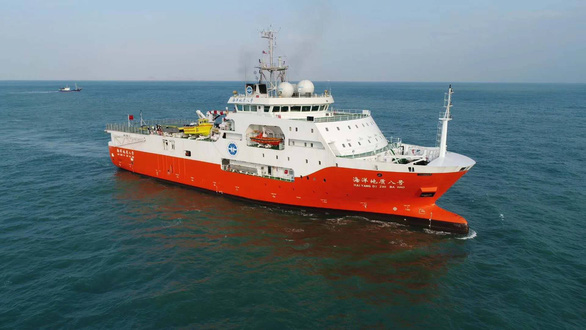 A Chinese survey ship which engaged in a month-long violation of Vietnam’s Exclusive Economic Zone (EEZ) and Continental Shelf in the East Vietnam Sea is no longer in the areas, the foreign ministry’s spokesperson Le Thi Thu Hang said on Thursday.

Starting on July 3, the Chinese survey ship Haiyang Dizhi 8 and its escorts blatantly disrupted and interfered with Vietnam’s economic activities through illegal moves in the waters near the Tu Chinh – Vung May (Vanguard Bank – Rifleman Bank) region.

“According to the information available to us, as of August 7, the Haiyang Dizhi 8 survey ship and its escorts had ceased their activities and exited Vietnam’s EEZ and Continental Shelf,” Hang told reporters at a regular press briefing in Hanoi on Thursday.

Continuing on the same issue, Hang said Vietnam has taken many measures and asked countries to respect its sovereignty and jurisdiction in the East Vietnam Sea in accordance with international law.

The ship was seen on Wednesday near the Chu Thap (Fiery Cross) Reef, which belongs to Vietnam’s Truong Sa (Spratly) archipelago, according to an update on Twitter by Prof. Ryan Martinson from the U.S. Naval War College.

Martinson has tracked and posted updates on Haiyand Dizhi 8’s path on the social media platform since July 3.

It is not immediately clear whether the Chinese ship will return, as some of its escorts remained near the Tu Chinh area as of Wednesday, the professor noted.

Hanoi has repeatedly demanded Beijing cease all unlawful activities, withdraw its ships from Vietnamese waters, and respect Vietnam’s sovereign rights and jurisdiction over its EEZ and Continental Shelf as defined in the 1982 United Nations Convention on the Law of the Sea (UNCLOS).