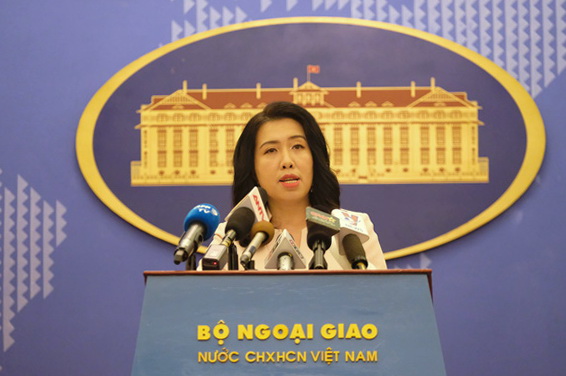 Vietnam demands that China immediately withdraw the geological survey ship Haiyang Dizhi 8 and its escorts from its Exclusive Economic Zone (EEZ) and Continental Shelf, the foreign ministry said on Thursday after confirming the Chinese ships have violated Vietnamese waters for the third time in two months.

The Chinese group of ships has since September 7 resumed infringement upon the Vietnamese waters, the foreign ministry’s spokesperson Le Thi Thu Hang told reporters in Hanoi.

The Haiyang Dizhi 8 first entered Vietnam's EEZ in the southern area of the East Vietnam Sea on July 3 and appeared to conduct a seismic survey. It left the area on August 7 and returned a week later escorted by Chinese coast guard vessels.

This is the third time since July the Chinese fleet has entered the area, which “lies entirely within the sovereignty and jurisdiction of Vietnam,” Hang said.

“The Haiyang group of ships has continued to seriously violate Vietnam’s sovereignty and EEZ,” the spokesperson added.

Vietnam requires that China immediately pull these ships from Vietnam’s EEZ and Continental Shelf as defined in the provisions of the 1982 United Nations Convention on the Law of the Sea (UNCLOS), Hang said.

Hanoi pressed the same demand during the previous incidents, having asked Beijing to respect Vietnam’s sovereignty, jurisdiction, rights and legitimate interests in the East Vietnam Sea.

Vietnamese authorities have continued to implement measures to enforce the country’s legitimate sovereignty, sovereign rights and jurisdiction in accordance with local and international laws, the spokesperson added.

Vietnam attaches great importance to peace, security and the rule of law in the East Vietnam Sea, and is willing to resolve disagreements through peaceful measures, she added.

Hanoi always values, and wishes to promote, friendly relations with Beijing in the interests of the two countries and peoples, as well as of peace, stability, and security in the region and the world, she said.

At the same time, Vietnam will resolutely and persistently protect its legitimate rights and interests, Hang underlined.

Vietnam calls on relevant countries and the international community to make active contributions to maintaining regional and global peace, stability and cooperation, including those in the East Vietnam Sea, the spokesperson said.