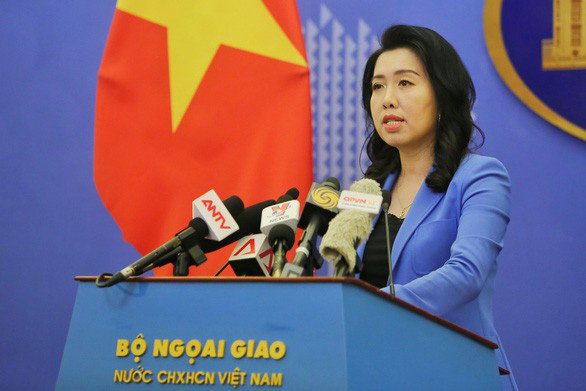 Vietnam’s foreign ministry on Friday released a statement on the information that the Chinese survey vessel Haiyang Dizhi 8 and its escorts have exited Vietnam’s Exclusive Economic Zone (EEZ) and Continental Shelf.

Vietnam has made statements on the activities of the Chinese group of ships on many occasions, the foreign ministry’s spokesperson Le Thi Thu Hang was quoted as saying in the statement.

“All activities that are not permitted by the Vietnamese government in the Vietnamese waters which are designated in line with the 1982 United Nations Convention on the Law of the Sea (UNCLOS) violate Vietnam’s sovereign rights and jurisdiction,” Hang said.

“Vietnam demands all relevant parties respect its sovereignty, sovereign rights and jurisdiction, and not repeat violations.”

Earlier, the Haiyang Dizhi 8 was tracked speeding away from Vietnam’s EEZ towards China on Thursday under the escort of at least two Chinese ships, Reuters reported, citing data from Marine Traffic, a website that tracks vessels.

The Chinese vessel and its escorts have repeatedly infringed upon Vietnam’s EEZ and Continental Shelf since July.

The Haiyang Dizhi 8 first entered Vietnam's EEZ in the southern area of the East Vietnam Sea on July 3 and appeared to be conducting a seismic survey.

The ship left the area on August 7 and returned one week later under the escort of Chinese coast guard vessels.

The Chinese fleet entered the area for the third time on September 7 and illegally operated there until September 27, according to Twitter updates from Prof. Ryan Martinson of the U.S. Naval War College.

On October 3, Vietnam's foreign ministry announced that the group of ships had “expanded their operation range” within Vietnam’s EEZ and Continental Shelf.

Hanoi has persistently made clear that the waters lie “entirely within the sovereignty and jurisdiction of Vietnam."

Vietnam has resolutely voiced its opposition to these illegal actions on multiple occasions, and has repeatedly demanded that China withdraw its ships from the Vietnamese waters.

The Vietnamese Ministry of Foreign Affairs has also condemned actions that obstruct Vietnam's oil and gas activities within Vietnamese waters as violating international law and the 1982 UNCLOS.