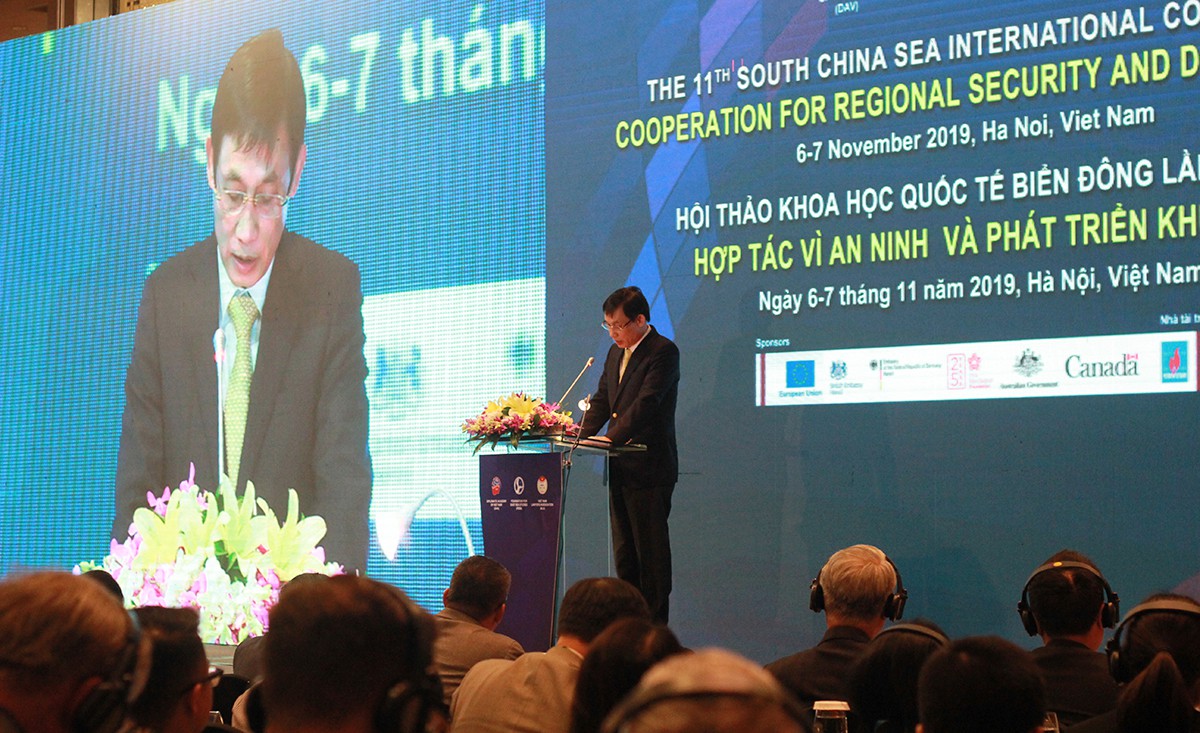 Foreign experts voiced their concerns over China’s recent actions in the East Vietnam Sea during an ongoing international conference on cooperation, security, and development in the waterway in Hanoi.

Greg Poling, director of the Asia Maritime Transparency Initiative at the U.S.-based Center for Strategic and International Studies (CSIS), stated at the conference that the most important development in the East Vietnam Sea over the last year has been the growth in the number of China Coast Guard and maritime militia vessels China has deployed to Vietnam’s Truong Sa (Spratly) archipelago, the Vietnam News Agency reported.

Poling was speaking at the opening session of the “11th [East Vietnam Sea] International Conference” – a forum held to discuss the current state of affairs in the East Vietnam Sea and identify the threats, risks, and opportunities in the waterway in the context of establishing regional peace and stability.

The Chinese ships currently patrolling the entirety of the illicit ‘nine-dash line’ are becoming increasingly aggressive in their harassment of Southeast Asian nations' attempt to carry out legal initiatives in the region, including oil and gas work, fishing, and the resupply of their maritime outposts, he said.

“If the situation continues, it will soon be too risky for regional actors to engage in any normal activity without Chinese participation,” he was quoted as saying by the state media.

The ‘nine-dash line’ is an arbitrary demarcation line used by the Chinese to illustrate Beijing’s illegal and unilaterally declared claims to vast expanses of the East Vietnam Sea, including large swathes of Vietnam’s Continental Shelf.

Beijing continues to challenge rules-based order in the area by building artificial islands with military facilities and weapons systems, drilling for oil and gas, and chasing its Southeast Asian neighbors’ fishing vessels from waters where they have the rights to fish in accordance with the United Nations Convention on the Law of the Sea (UNCLOS), said Dr. Nicola Casarini from the Istituto Affari Internazionali of Italy.

Casarini was speaking at the conference’s second session titled “Competing Visions” – a discussion focused on examining the importance of the East Vietnam Sea in various countries’ strategies and regional visions.

The European Union is scaling up its security engagement in and with Asia, in line with the EU Global Strategy’s objective to support a rules-based international order, Casarini said.

Participants at the conference the East Vietnam Sea’s connection with major regional players’ security and economic prosperity, as well as the differences and similarities in their interests and approaches to the waters.

The goal was to better understand the nature of regional countries’ cooperation and competition over relevant issues, both in the present and in the future.

The panelists were also asked to examine the East Vietnam Sea from the perspectives of their own countries’ policies and strategies relating to interactions with China and other East Vietnam Sea stakeholder nations, particularly in the context of Beijing’s Belt and Road Initiative and the United States’ Free and Open Indo-Pacific concept.

The 11th meeting of the annual East Vietnam Sea conference is being jointly organized on November 6-7 by the Diplomatic Academy of Vietnam (DAV), the Foundation for East Sea Studies (FESS), and the Vietnam Lawyers Association (VLA).

More than 50 speakers and approximately 250 officials, scholars, and diplomats from Vietnam and abroad are taking part in the conference.

Since its first edition in 2009, the conference has become one of the most prominent gatherings of leading experts to discuss maritime security, international law, marine economic development, and marine ecology.