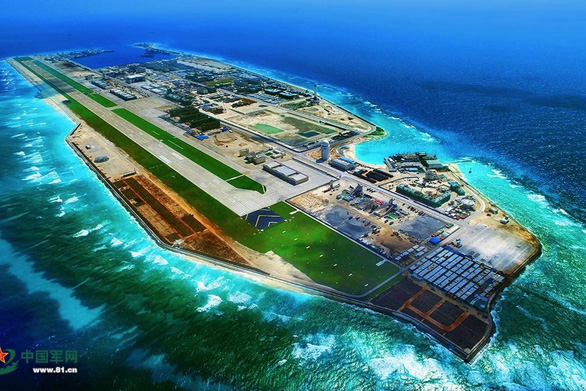 Editor’s note: China has been accused of taking advantage of the coronavirus disease (COVID-19) outbreak to push its territorial ambitions in the East Vietnam Sea.

After sinking a Vietnamese fishing boat, China last week announced the creation of two so-called new districts to cover features in Vietnam’s Spratly and Paracel islands in the East Vietnam Sea, prompting protests from Hanoi as Beijing has repeatedly ignored the 2016 decision by the United Nations-backed arbitral tribunal.

The moves have also been widely criticized by the United States and the Philippines since the above-mentioned arbitral tribunal was constituted under Annex VII of the United Nations Convention on the Law of the Sea (UNCLOS). That means China continues to violate international law.

In an exclusive article for Tuoi Tre News, Professor Sascha Dov Bachmann from Canberra Law School – University of Canberra, Australia argues that China may be trying to weaponize COVID-19 in the East Vietnam Sea.

While there is little evidence that COVID-19 was developed as a biological weapon for offensive purposes, it can’t be disputed that China’s leadership and People's Liberation Army are exploiting the vulnerabilities and weaknesses caused by the pandemic as part of their unrestricted warfare and three-warfare approach.

While the rest of the world is trying to contain the COVID-19 pandemic and to minimize the loss of life as well as the impact on the economy and society, Beijing seems to be bound to exploit the current ‘weakness’ and shift of focus among its ‘partners’ and adversaries.

With the U.S. and its allies battling the current pandemic, China continues to take advantage of the situation by using COVID-19 firstly for its influence and information operations, and secondly for pushing its territorial claims with respect to the East Vietnam Sea, East China Sea, Taiwan, and Hong Kong.

China attempts to present itself as the only state capable of containing the coronavirus within its borders and, more recently, as the global savior in regard to delivering personal protective equipment aid to the nations in need: at a high cost of course as China’s leadership has managed to turn ‘face mask diplomacy’ into a new form of Chinese mercantilism affecting lives and economies globally. The overall ‘success’ of these operations remains to be seen with China facing an increased diplomatic backlash in Africa, Europe, Australasia, and the US, as well as a deterioration in the public opinion towards China: such sentiment comes at a cost and a rise in Sinophobia has become a regrettable fact.

Going back to the second example of China’s exploitation of the pandemic: the renewed pushing of territorial claims and here in particular in the [East Vietnam Sea].

Beijing’s decision to send again its Haiyang oil exploration vessel back into Vietnamese EEZ waters, another sinking of a Vietnamese fishing trawler in waters illegally claimed by China, chasing of Indonesian fishing trawlers out of Indonesian EEZ waters are all testament that China is exploiting the current COVID-19 pandemic which has shifted the focus of ASEAN and the U.S. and its allies from challenging China’s proven illegal claims in the East [Vietnam] Sea and the actual capability to counter Beijing’s aggression.

The U.S. Navy’s operational capabilities are seriously affected by COVID-19, highlighted by the fact that to date three out of 11 U.S. aircraft carriers have reported infections.

This adds to the U.S. Navy’s overall disadvantage in respect to China’s Navy in terms of available bases – with Japan and Guam the next major U.S. Navy bases and thus shortening actual ‘in theater’ times due to logistical and operational constraints.

COVID-19 has heavily impacted on available naval and military capabilities, not to speak of the impact it has on theater operations, available force assets, and deployment capabilities, as well as public opinion preoccupied with the pandemic and subject to China’s three-warfare information operations. There is no better time than now to signal Beijing’s disregard for the East [Vietnam] Sea Tribunal ruling and to create a situation which can’t be reversed if unchallenged.

Beijing’s recent announcement on the creation of two new administrative districts to cover Paracel and Spratly is an example of China’s disrespect for international law, which is particularly worrisome given that China leads four out of 15 international UN bodies. This can be seen as another test of international law and comity.

China is continuing its activities which run against the findings of the tribunal in 2016 – breaking international law under UNCLOS and violating the maritime rights of its neighbors. All this is part of its current drive to turn the East Vietnam Sea into a fait accompli while compromising international law and comity. One has to conclude that China has made COVID-19 a force multiplier for its power ambitions and aggression in the region.