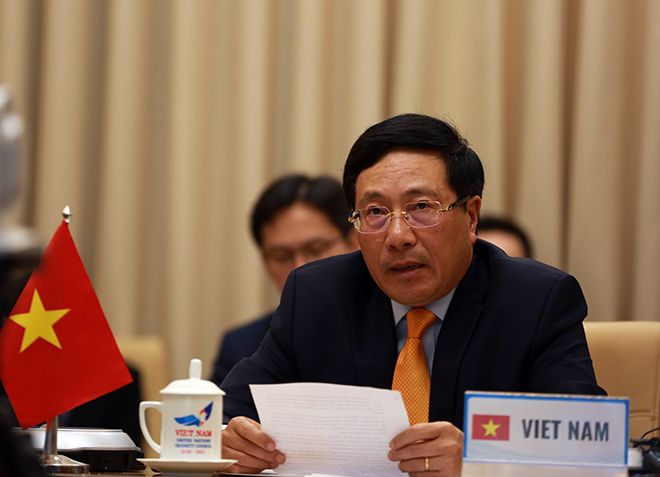 Vietnam believes upholding international law, strengthened solidarity, cooperation and mutual trust on a global scale must underline efforts to preserve the hard-won peace and stability in all parts of the world, Vietnam's Deputy Prime Minister and Foreign Minister Pham Binh Minh remarked at a United Nations Security Council (UNSC) meeting on Friday to mark 75 years of the end of the Second World War in Europe.

Minh attended the UNSC high-level video meeting with the theme ‘75 years from the end of the Second World War on European Soil — lessons learned for preventing future atrocities, responsibility of the Security Council,’ which took place on Friday, the Vietnam Government Portal reported.

Seventy-five years ago, the deadliest war in human history ended, but only after having caused untold suffering to hundreds of millions of people around the world, Minh emphasized.

The defeat of the fascists and aggressors in the Second World War, and indeed in all wars and conflicts, proved that actions driven by expansionism, militarism and the thirst for conquest and dominance can never bend the will of nations to fight for their independence and freedom, he said.

He added that for Vietnam, the end of World War Two helped bring a new beginning, as the nation emerged independent after nearly a century under colonialism.

Rising from the ashes of World War Two, nations have come together to rebuild a more peaceful, stable and prosperous world.

At the center of these efforts emerged a collective security system anchored in the UN Charter and international law, the deputy PM said.

"Unfortunately, the end of the Second World War did not mean that peace was guaranteed. Colonialism and aggression continued to wreak havoc on nations. Vietnam, for one, suffered decades of devastating wars before our final victory in gaining independence, unification and peace,” Minh was quoted by the Vietnam News Agency as saying.

Given the lessons learnt from World War Two and Vietnam's own history, the country believes strongly that upholding international law, strengthened solidarity, cooperation and mutual trust on a global scale must underline efforts to preserve the hard-won peace and stability in all parts of the world, he stated.

He said the principles of the UN Charter, particularly those of sovereign equality, territorial integrity, non-use of force and peaceful settlement of disputes, have proven to be pivotal in preventing another disastrous world war and maintaining sustainable peace.

The deputy PM and foreign minister expressed his belief that the world’s common human aspiration for peace, freedom and justice, and our determination to defend independence, sovereignty and territory, will prevail over confrontation, the use of force and attempts for domination and conquest.

The state president, prime minister, and NA chair have presented their reports on performance during the 2016-21 period