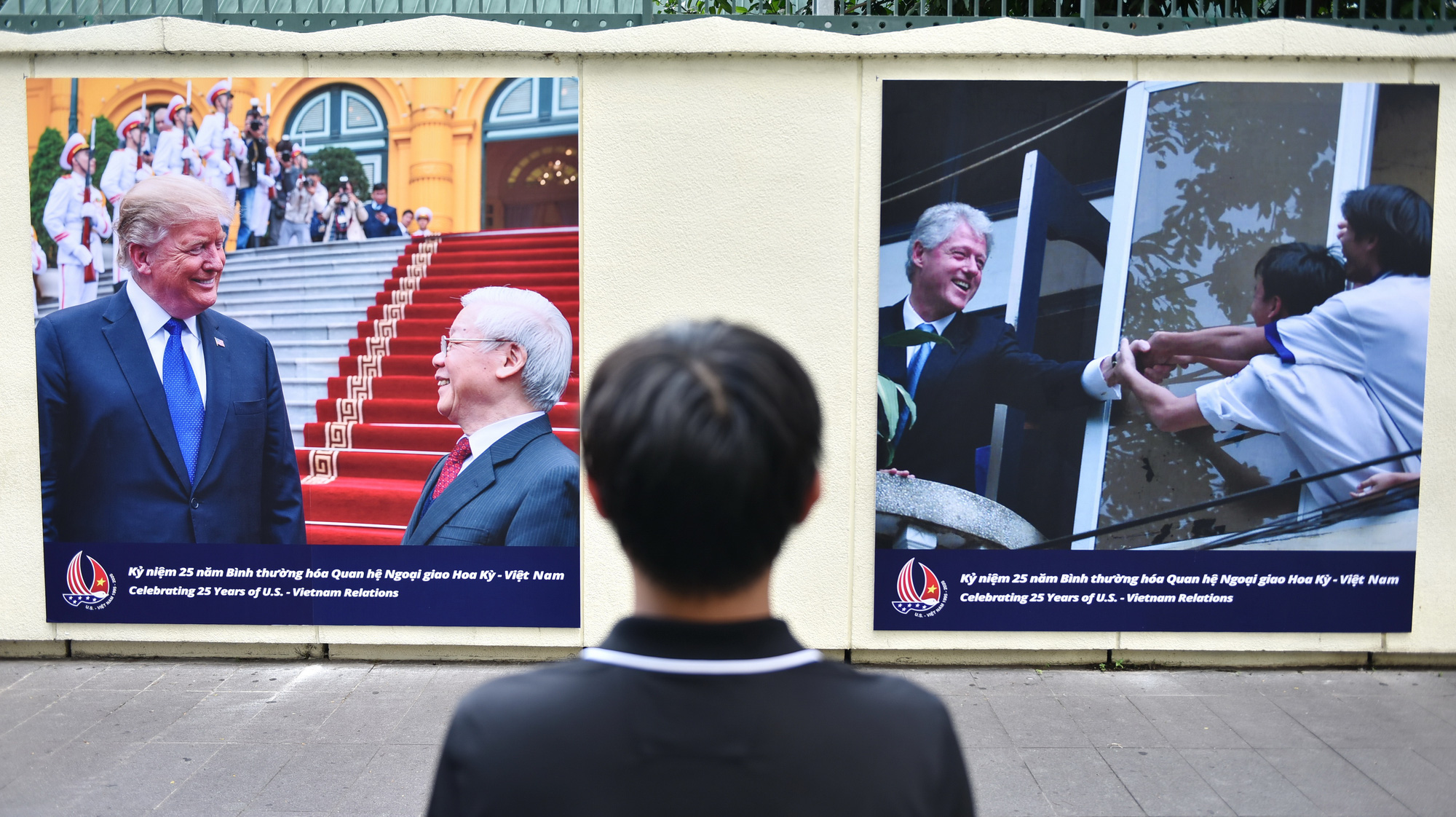 Nearly 20 photos are on display on the peripheral wall of the U.S. Consulate General in Ho Chi Minh City as part of a mini-exhibit to commemorate the 25th anniversary of bilateral diplomatic relations.

U.S. President Bill Clinton announced the formal normalization of diplomatic relations between the United States and Vietnam on July 11, 1995.

Each of the 19 photos on display tells a story about the Vietnam-U.S relationship in the last 25 years. There are unforgettable moments and also interesting ones.

“We wanted to create a photo exhibit on the Consulate wall to tell the incredible story of our how our two countries became the partners and friends we are today”, Matthew Ference, public affairs officer at the U.S. Consulate General in Ho Chi Minh City, told Tuoi Tre News.

Looking at the mini-exhibit on Le Duan Street in District 1, one can see historic milestones in the bilateral relationship, such as President Clinton’s historic visit to Vietnam in 2000 or President Donald Trump speaking with Vietnamese General Secretary and State President Nguyen Phu Trong during a visit to Hanoi in February 2019.

“The photo wall also celebrates important individuals who successfully advocated for the normalization of relations, such as Senator John McCain and Senator John Kerry,” said Ference.

The photo of U.S. Senator Patrick Leahy speaking to the media at the launch of a dioxin cleanup project at Da Nang Airport in the namesake central city in April 2014 marks a significant milestone in the expanding partnership between the United States and Vietnam to address the legacy of war issues.

After four years of work, the two countries announced the successful completion of the project, which led to the launch of a similar joint dioxin remediation project at Bien Hoa airbase in the southern province of Dong Nai in 2019.

Other photos highlight the strength of people-to-people ties, such as the photo of a group of Vietnamese Young Southeast Asia Leadership Initiative (YSEALI) students in Washington DC, or one of U.S. Ambassador to Vietnam Daniel Kritenbrink speaking to students at a community relations event during the aircraft carrier USS Theodore Roosevelt's visit to Da Nang in March 2020.

Photos of U.S. Consul General in Ho Chi Minh City Marie Damour during a November 2019 visit to An Giang Province in the Mekong Delta, where she met with the Muslim Cham community at Mubarak Mosque and learned about eco-tourism at Tra Su Cajuput Forest, further demonstrate the strong engagement of the U.S. throughout Vietnam.

“We hope residents of Ho Chi Minh City can stop to take a look at these photos when passing by Le Duan Street, whether to enjoy reliving famous moments from the past 25 years or to learn something new about our partnership with Vietnam,” said Ference.