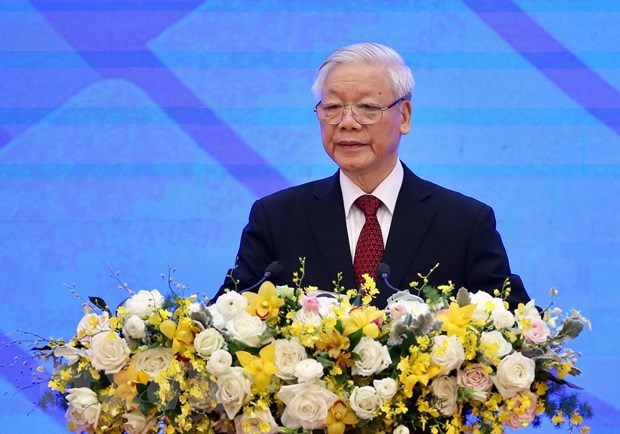 In his welcome remarks, Party General Secretary and State President Trong said in 2020, ASEAN member countries have shown their will, resolve, and efforts to overcome a range of difficulties and challenges.

He commended the cohesive and responsive spirit of ASEAN in COVID-19 prevention and control, and the settlement of its consequences, saying public confidence in governments’ capacity to handle diseases has improved.

ASEAN has gained successes in maintaining activities as well as its role and position over the past years, the top leader said, noting that partners have continued to attach importance to and support the grouping’s centrality.

Given huge human and property losses caused by natural disasters and diseases, he called on ASEAN leaders to put forth more drastic and effective measures to well control new COVID-19 infections, revive the economy, stabilize lives, and ensure social welfare for all regions and people of countries.

“Establishing a suitable foothold for ASEAN in the post-pandemic world is a major matter,” he said.

“The strong wish and will to maintain a peaceful, stable, and united region in line with international law should continue to be a core value of Southeast Asia and the ASEAN Community.”

In the new context, the ASEAN countries need to display their mettle and actively coordinate to realize recovery initiatives and plans, with new, result-oriented operation and cooperation methods.

The values of regional dialogue and cooperation frameworks with ASEAN holding the central role should be brought into full play, the Party and State leader said, stressing that ASEAN would contribute more actively and effectively to efforts to promote multilateral cooperation and international law, and consolidate the international multilateral system with the United Nations as the core.

On this occasion, he laid emphasis on Vietnam’s policy of maintaining independence, self-reliance, multilateralism, and diversification of external relations, being a trustworthy friend and partner and an active and responsible member of the international community, striving for peace, cooperation, and development.

Delivering the opening speech, Prime Minister Nguyen Xuan Phuc pointed out challenges caused by the COVID-19 pandemic and natural disasters that would “sweep away” social progress and economic achievements built up for tens of decades.

It will take countries many years to overcome these losses, PM Phuc said.

The governments of ASEAN member countries have united and acted together since the very first days, he said, adding that ASEAN leaders and partners made strong commitments during the Special ASEAN Summit and ASEAN 3 Special Summit on COVID-19 that were held in mid-April, when the pandemic began to break out, in the spirit of cohesiveness and responsiveness.

During the 36th ASEAN Summit in June 2020, the ASEAN member countries took stronger actions at both national and regional levels. The ASEAN COVID-19 Response Fund announced at this summit received up to US$10 million in aid.

At the 37th ASEAN Summit, the ASEAN member countries are expected to establish regional reserves of medical supplies that enable rapid response to emergency needs and standard procedures in response to pandemics.

With the support of Japan, the grouping agreed to form the ASEAN center for public health emergencies and emerging diseases, PM Phuc said, noting that these cooperation outcomes are significant to improving capacity for responding to medical emergencies and disease risks in the future.

He stressed the need to raise institutional capacity as well as the capacity to effectively operate the ASEAN apparatus in order to adapt to the requirements of the new situation.

Reviewing the implementation of the ASEAN Charter is a need, and the leaders will look at this important task during the 37th Summit, he said.

In realizing the dual tasks of containing the pandemic and promoting recovery, the leaders will officially approve the ASEAN Comprehensive Recovery Framework and a detailed implementation plan for all of the three pillars.

Efforts have been made to promptly step up plans maintaining production and supply chains, enhance connectivity, and restore trade in the region. Meanwhile, a safe travel framework for businesses and investors has been formed amidst COVID-19.

“Firstly, we would consider resuming a common route for ASEAN citizens at border gates,” he suggested.

Emphasising the risks to global peace and security, PM Phuc said ASEAN has consistently maintained its balanced and harmonious approach, as well as its centrality.

He lauded the statement issued by ASEAN Foreign Ministers on the occasion of the 53rd anniversary of the association that has affirmed the resolve to maintain a Southeast Asian region of peace, security, stability, and neutrality.

At the same time, the bloc has demonstrated its consistent stance and principles, and strong commitments to building the East Vietnam Sea – a major maritime route of the region and the globe – into an area of peace, stability, security, and safety for the free circulation of goods.|

The East Vietnam Sea is the area where differences and disputes should be addressed by peaceful measures, law is respected and observed, and common values are confirmed, the PM stressed.

“We are looking forward to soon completing an effective and efficient Code of Conduct in the East Vietnam Sea, in line with international law, including the 1982 United Nations Convention on the Law of the Sea.”

The leader also talked about the first-ever ASEAN Women Leaders’ Summit where representatives of female leaders will raise their voice on women’s role in promoting sustainable development in the post-pandemic world.

He suggested ASEAN focus resources and efforts at the highest level on driving back the pandemic, soon producing COVID-19 vaccines, and having effective treatment methods, while improving medical preventive capacity in order to respond to public health emergencies and protect the public’s health and life at the best.

It is a must to intensify measures to help enterprises restore production and business, and create jobs and livelihoods for people, he noted.

ASEAN councils need to promptly implement the ASEAN Comprehensive Recovery Framework and the implementation plan right after this summit, he requested.

ASEAN also needs to establish its position given the shift of economic and political strength between countries as well as the adjustment of the global production and supply chain, he proposed.

The leader said equal and sustainable development is of special significance to the ASEAN Community building, especially at a time when diseases and natural disasters are threatening regional growth. Peace and stability are the prerequisite conditions for recovery and development. Meanwhile, ASEAN identity, solidarity, and unity need to be carried forward in this tough time, he stressed.

Concluding his speech, PM Phuc believed with its solidarity and self-resilience, ASEAN will firmly overcome challenges, toward wealthy and prosperous life for more than 600 million people, effectively contributing to peace, stability, and development in the region and the world.