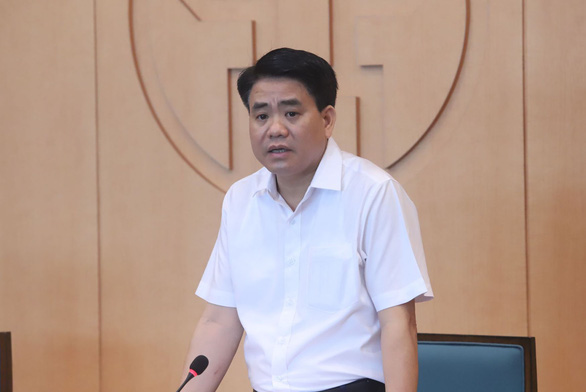 Public security officers have requested the People’s Procuracy to prosecute Nguyen Duc Chung, former chairman of the Hanoi People’s Committee, alongside three other accomplices after a probe into Chung’s alleged appropriation of state secret documents was already wrapped up.

On Saturday, investigators under the Ministry of Public Security said they had finished probing Chung’s case.

They have transferred all case files to the Supreme People’s Procuracy to assist the prosecution of Chung for “appropriating state secret documents,” as prescribed in Article 337 of Vietnam’s Penal Code.

Prosecution is also requested for three other accomplices involved in the case, including Nguyen Anh Ngoc, 46, former deputy head of the editorial department at the municipal People’s Committee; Nguyen Hoang Trung, 37, who worked as Chung’s driver; and Pham Quang Dung, officer of the anti-corruption police department at the Ministry of Public Security.

The four had been detained earlier this year on suspicion of stealing confidential documents related to an investigation into the so-called Nhat Cuong case, referring to a technology firm and mobile phone vendor in the Vietnamese capital.

Major General To An Xo, chief of the Ministry of Public Security Office, said Chung was found associated with at least three cases.

Besides the ongoing state secret appropriation case, Chung was involved in the multiple violations of Nhat Cuong Trading & Service Co. Ltd., which include smuggling, money laundering, as well as other wrongdoings.

He was also found responsible for violations of regulations on administrating and using state assets in Hanoi.

On August 11, Prime Minister Nguyen Xuan Phuc signed a decision to suspend Hanoi chairman Chung from work for 90 days over his responsibility in the cases.

He started chairing the People’s Committee of Hanoi on December 4, 2015 after more than a decade of having risen through the ranks in the municipal Department of Police, of which he was named director in September 2012.